The government has wasted so much of precious legislative time in traducing laws that could only divide the country and not help it move forward.

It is heartening that the Modi government has decided to modify and ease some of the legal provisions relating to cattle. In its submissions before the Supreme Court on 15 June, 2017, the government said that it was willing to revise some of the laws relating to sale of cattle and even cow slaughter.  Ravi Shankar Prasad, Union Minister for Law and Justice announced, “[The] NDA government doesn’t intend to bring in any law that would in any manner interfere with the eating habits of any community.” Hopefully, India can continue its march towards a better future without being distracted by a series of laws – all aimed at restricting both sale and slaughter of both cows and buffaloes.

It began with restrictions and bans on slaughter of cows and their progeny.  Then it was extended to even transportation of “cows and their progeny”.  New laws went further to introducing restraints on slaughter houses in Uttar Pradesh (UP). Ostensibly, it was aimed only at illegal slaughter houses.  But with no regularization of existing slaughterhouses, no path forward, and no way out either, it became clear that the laws were intended to curb slaughter houses. The UP government then went even further by bringing cow slaughter under purview of the dreaded National Security Act (NSA) which was meant only for treason and acts against the state.

And, in May this year, the Union Ministry of Environment, Forests and Climate Change (MoEFCC) notified new rules under the Prevention of Cruelty to Animals Act. These banned sale of cattle for slaughter in open markets across the country. A gazette notification, titled Prevention of Cruelty to Animals (Regulation of Livestock Markets) Rules, 2017, declared that nobody could bring cattle to animal markets unless he or she has furnished a written declaration that the cattle will not be sold for the purpose of slaughter. It was to challenge this and other laws that various parties filed appeals before various courts.  The Madras High Court issued an interim stay against the MoEFCC notification.  Even the Supreme Court decided to ask the government to explain its stand. The assurances by the government on June 15, must be seen against this backdrop.

Effectively, the government has wasted so much of precious legislative time in traducing laws that could only divide the country and not help it move forward.  And short-sighted as legislators can sometime be, all these rules could actually push India back economically, by at least a couple of decades, if not more.

But before one goes to the damage to the economy, let’s begin analyzing what happens when a government uses propaganda to drive a trade to the ground. As the table alongside amply makes clear, far from protecting cows, the laws actually encourage people not to buy cows. Arguments like the cow is a mother are emotionally charged statements.  The fact is that the farmer buys a cow not for worship, but for an economic purpose (“One does not buy one’s mother,” explains an economist). When its economic value is over, the owner needs to sell it and recover some money which he uses to purchase another cow.  When laws prevent him from doing this, he moves away from buying cows. And that is precisely what has happened. The trader, too, who normally offers anywhere between Rs 20,000-30,000 for a non-lactating cow, now begins offering less money – sometimes less than Rs 10,000 – because he would experience difficulties in selling the cow to a slaughter house.

The farmer uses this money to purchase another cow.  A good cow can cost between Rs 30,000 to Rs 60,000.  The money he gets from the sale of the non-lactating cow subsidises the cost of the purchase of a new cow. With this amount not being realised, the farmer opts not to buy cows any more.  He opts for buffaloes instead.

The purchase of a buffalo made economic sense for two reasons.  First, it fetched a higher price when it stopped lactating.  Second, since buffalo-milk has a higher fat content, it can fetch up to Rs 33 a litre against Rs 26 a litre for cow-milk.  The new notification by the MoEFCC threatened to change the economics for buffaloes as well.

As things stand, the existing laws have hurt the cow ownership market badly. This is evident from table 1. It shows how the very states that have been crying shrilly about protecting cows have witnessed a decline in the number of cows. Observe the ratio of cows to buffaloes.  As against an all-India ratio of 1.76 cows to a buffalo, Haryana has seen a dip to 0.3:1; Punjab to 0.4:1, and UP to 0.6:1.

Even states like Gujarat have not been spared. This state, like UP, is also a Krishna-worshipping state, because this Hindu God is believed to have been born and raised around Mathura and Brindavan, and then migrated to Dwarka in Gujarat.  In fact, legend blends into reality because historically, the regions of both UP and Gujarat have enjoyed the highest milk production. But not through cows.  In Gujarat too, the ratio of cows is just 0.96 to a buffalo.

Do also note that this data relates to 2012, before the ban on sale and transport came into force.  Earlier, Gujarat’s farmers could sell a cow – even during the chief ministership of present prime minister Narendra Modi. Now even that is forbidden. Expect this ratio to tumble drastically, because the Gujarati farmer is far more mercantile in his approach than his counterparts in most other communities. Effectively, India has made the two Krishna-states witness the shrinking of its cow population.  Moral: protectionist laws can eventually lead to smothering.  The cow runs the risk of becoming an endangered species in these states.

Conversely, watch the surge in the cow population in states that have not been very shrill about cow slaughter.  The leaders here are West Bengal, the Northeast, Odisha and Kerala. Another worrisome thing is the coincidence of gau-rakshak states also being those which have had the worst gender ratios in India. It would appear that the demographic myopia that afflicts gau-rakshak territories extends to human beings as well.

Both are born out of a fundamentalist/paternalistic streak.  It is the paternalistic/fundamentalist urge to protect women that makes people force girls to stay indoors.  They are perceived as a risk.  Hence, you end up first controlling them, then guarding them zealously, and then end up not wanting them.  The same logic is at work with cows as well.  You think they need protection.  The farmer concurs, and stops having cows. 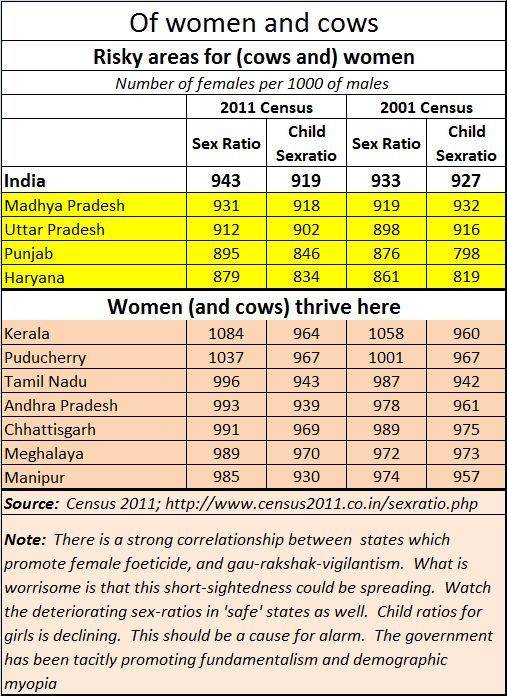 Compare the ratios against the national average, and the problem becomes clear. If the all-India sex ratio is better than those of gau-rakshak states, it is because of states that allow both cows and girls to thrive.

Obviously, if the ban on the sale of buffaloes as demanded by the MoEFCC  had been made effective, it would have turned farmers away from buffaloes as well. If farmers begin shunning ownership of cattle because of the burden they post, it could lead to the nightmarish possibility of destroying India’s position of being the largest milk producer in the world. It would harm all the gains of Operation Flood that Verghese Kurien so carefully crafted with support from successive governments.  It was this strategy that has made Amul the largest agricultural brand in the country (Five things that set Amul apart from others)

That would jeopardise the milk industry entirely, which accounts for 24 percent of agricultural GDP in the country.  Look at it this way.  The country produced 155,491,000 tonnes of milk in 2015-16 (see table 1).  Just multiply this with Rs 26 that a litre of cows’ milk fetches (not Rs 33-36 that is paid for buffaloes’ milk.  It is then that you realise that this is an industry that generates farmer wealth of over Rs 404,277 crore annually.  This is without counting the money that comes from higher value-added milk based products. More importantly, the industry has been growing and is reckoned to provide the fastest route to rural economic upliftment in India.

All the gau-rakshak laws of the government could stunt the growth of this industry, even compel it to decline. And this is only the beginning of the economic damage that could be caused. But more of that in the next part.http://www.moneycontrol.com/news/trends/current-affairs-trends/why-the-cattle-slaughter-ban-is-a-bad-idea-mirrors-another-fundamentalist-streak-2305961.html

India - 4 Maharashtra MLAs among India’s richest 20
When 'angry' RSS put faith in Manusmriti instead of Ambedkar's Constitution
How Odisha Government Kept The Public Out Of A Public Hearing For A Bauxite Mine
#Goodnews - Bombay High Court grants anticipatory bail to Teesta Setalvad, stresses Right to Dissent