A detailed baseline study conducted in seven districts of eastern Uttar Pradesh shows that underage marriages are still widely prevalent, particularly in disadvantaged communities, and this practice holds back girls from realizing their full potential 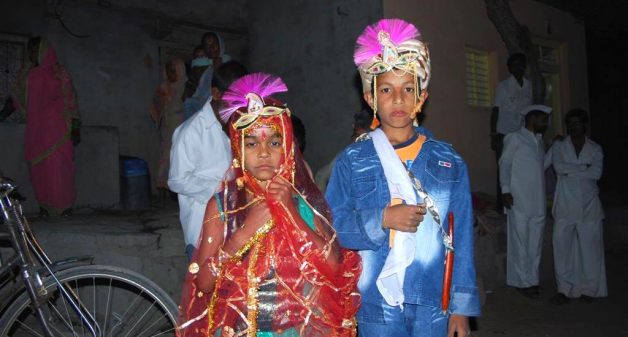 Child marriages are prevalent in many parts of India. (Photo by Naga Rick)

India is today a country of the young, but rigid patriarchal structures and regressive social structures in many parts of the country are making it impossible for the country’s youth to realize their full potential. The widespread practice of underage marriage is a prime example of this.

Adolescents form 22% of the total population of India. The country has around 240 million adolescents (10-19 years) according to Census 2011. We often talk of a demographic dividend because most of our citizens are young. However, this advantage quickly turns into a nightmare since 70% of adolescent girls in India are anemic; the figure for boys is 50%. More worryingly, as much as 47% of Indian girls get married before they are 18 years of age, according to a 2016 report by UNICEF. This severely damages their potential of growing into productive adults.

Adolescence represents a critical stage of transition from childhood to maturity. The physical and emotional experiences, knowledge and skills acquired during this phase have important implications during adulthood. Adolescents, however, are neither seen as adults nor as children and often bear double disadvantage due to it. Like among any other vulnerable demographic group, gender discrimination makes it even more difficult for the adolescent girls, which is clear from the above statistics.

Some of the states that are very important for driving overall growth indicators of India represent a bleak picture. Uttar Pradesh (UP), the most populous state within India, is a case in point. The state ranks first in terms of adolescent population in the country. The Census 2011 threw up several bleak statistics for this age group in UP. As per the Census 2011, around 2 million adolescent girls — which translates into 9.2% of all girls of ages 10-19 years — were married. An even more alarming figure is that around one million children, highest in India in absolute terms, were born to these adolescent girls in Uttar Pradesh and 10.1% of those babies died.

No girl as bride

Says Girls Not Brides, an international civil society organization: “Patriarchy, class, and caste influence the norms and expectations around the role of women and girls in India. In many communities, restrictive norms limit girls to the role of daughter, wife, and mother who are first seen as the property of her father and then of her husband. Controlling girls’ and women’s sexuality is an influential factor in the practice of child marriage too.”

These deductions become clearer when we engage in research in eastern UP, which generally presents a worse picture than the whole of UP. The districts bordering Nepal in eastern UP are among the worst in all human development indicators. In 2016, a situational analysis (SA) study was undertaken by an NGO called Breakthrough Trust with the help of research agency NRMC in seven districts of Eastern UP to understand the issues in depth. The study found that the school dropout rate rapidly increases with increase in age and therefore, a lesser number of children can be found in the school after the age of 14 or class 8, compared with age 10-12.

Cohorts covering standard 6, 7, 8 hence seemed most critical for direct intervention for any program that tries to target reduction in adolescent pregnancy and early marriage, as these are the formative years and there is still some chances of getting adolescents in schools.  It noted that along with physical, psychological and emotional changes that adolescents go through, social and gender norms at different levels start playing out extensively at this stage. However, it is critical to remember that 15-19 years are crucial years for the adolescents as pressure to drop out from school increases manifold (on anyone who is still attending) and so does the pressure to get married for the girls and to earn for boys.

An analysis of the prevalence of married adolescent girls in the age groups 10-14 year and 15-19 year (Census 2011) in seven project districts shows worrying trends. While early marriages among adolescent girls of age 10-14 years in the project districts were low at 3-4%, the percentage rises significantly in the age group of 15-19 years. This age group also coincides with the onset of puberty. While Maharajganj and Siddharthnagar had the highest proportions — 24% to 23% — who were ever married, Varanasi at an average of 20% showed a higher prevalence. The remaining four districts had 14% to 18% of girls who were married.

An overwhelming 46% of the adolescents said they have experienced physical and verbal abuse within the family. This acceptance of physical violence if they break norms means that bringing in change is going to be an uphill task. This applies to the practice of underage marriages as well.

Adolescent pregnancy has issues linked to how empowered a girl felt to negotiate a delay in pregnancy or marriage. It depends on a family ready to work against the norm. For now, it seems an uphill task. The good news is that organizations are focusing on this and governments are aware of the need of working with adolescents to accrue the real demographic dividend. It is a positive signal that governments and NGOs are increasingly coming together to tackle the issue of adolescents’ empowerment.http://www.villagesquare.in/2017/04/21/breaking-norm-child-marriage-uphill-task-uttar-pradesh/

ICC ruling on Rohingyas can impact India as well
Why French newspaper refused to run PM Modi’s interview
MGNREGA wages less than minimum farm wages in 15 states
Condemn the impending arrest of Prof. Anand Teltumbde and dropping of trumped up charges against him