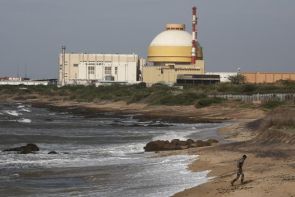 The first two units of the Kudankulam nuclear plant will discharge 6.3 billion litres of waste water every day right onto the beach. This discharge will trigger a slow-motion disaster that will poison beaches, devastate near-shore fisheries and choke the livelihood of fisherfolk in the vicinity, says Nityanand Jayaraman.

Only providence, not the plant’s design or regulators’ due diligence, will now help the Kudankulam reactor function without any major mishap if and when Unit 1 limps to commercial production of electricity. Unit 1 and 2’s effluent disposal system is inherently harmful, and regulators have cleared the plant for operation despite knowing that.

In June 2013, the Tamil Nadu Pollution Control Board renewed Unit 1 and 2’s license to operate. This allows each plant to discharge 6.3 billion litres of waste water every day right onto the beach. This discharge will trigger a slow-motion disaster that will poison beaches, devastate near-shore fisheries and choke the livelihood of fisherfolk in the vicinity.

When that happens, the blame should fall squarely on the individuals in Tamil Nadu Pollution Control Board, the State Coastal Zone Management Authority, the 12 members of the Union environment ministry’s expert appraisal committee on CRZ, and the ministry itself. All of them would have knowingly allowed this damage to happen.

As things stand, an open channel running along the nuclear plant’s seaside compound wall will empty the effluents onto the beach. That is a lot of pollution to dump into the Gulf of Mannar. 6.3 billion litres per day translates to 2,600 cusecs. Last fortnight, farmers in Tiruchirapalli rejoiced when 3,000 cusecs of water was released from the Mettur Dam. At full power, the two units will dump 5,200 cusecs of hot, salty, toxic water every day onto Kudankulam’s beaches.

Dr. Mark Chernaik, scientific advisor to ELAW-US — a global network of environmental lawyers and activists, reviewed Kudankulam’s Environmental Impact Assessment report and the response of the government’s expert group. According to him, “neither contains an adequate assessment of the impacts to marine life of cooling water (thermal) discharges.”

Citing case studies from China and Brazil, Dr Chernaik concludes that “The impact to marine life of thermal discharges are indirect, yet still very substantial: small increases of the temperature of marine water changes water chemistry, including reductions in dissolved oxygen levels. . .that can deleteriously impact fisheries. Also, fish may be able to migrate to avoid localised temperature shifts, but their food sources (sponges, algae, and small invertebrates) are fixed and cannot.”

Local effects on fisheries will be evident within days of release. According to a 2008 study for NPCIL, ocean currents in this region flow parallel and close to the shore. During the southwest monsoon, the currents flow east from Kudankulam towards Idinthakarai. Between November and February, the currents reverse.

The wastewater will kill all life in the inter-tidal zone in the immediate vicinity of the effluent channel. A 2011 study for Units 3 to 6 records 30 species of plankton in Kudankulam’s near-shore waters, nearly twice the number found in deeper waters. The hot water will float in the direction of the current, reducing dissolved oxygen and wiping out the plankton. The blanket of death will spread seaward until the temperature reaches ambient levels.

The rocky areas in the vicinity of the effluent channel are rich in prawns and lobsters. Local fishermen talk of days when prawns literally boil into their nets. Prawns and lobsters are not surface dwellers; so the hot water is unlikely to affect them directly. But, with the plankton gone, a keystone in the local food chain would have disappeared, knocking the life out of the local ecosystem and the fishery dependent community. All fish that can swim to cooler waters will leave.

The 2011 study also reports that the villages of Idinthakarai, Kootapulli and Perumanal — all in the vicinity of the plant — landed 14,000 tonnes of fish in 2010. At least half of that was sardines, a plankton-feeder. No plankton; no sardines.

Even the expert appraisal committee of the MoEF seems to think that discharging such a large quantity of polluted water onto the shores of the Gulf of Mannar Biosphere Reserve is not a good idea. The EAC considered NPCIL’s application for CRZ clearance for Units 3 to 6 in April and September 2011. The committee observed that the proposal is for “the construction of open channel for outfall. Due to various environmental problems, including adverse impacts on the marine life, the present proposal not (sic) acceptable.”

In May 2012, EAC recommended clearance with a condition that the effluent disposal scheme was “modified to discharge the [coolant water] through underwater pipelines to a region of 4-5 metres bathymetry which is away from the shore.”

Barring a few members, the EAC that made this insightful recommendation is the same that recommended CRZ clearance for Units 1 & 2 in March 2013. Curiously, this recommendation did not warn against near-shore discharge or recommend a deep-sea, marine outfall. As on date, the environment ministry’s website says that clearance is still pending. Legally speaking, the plant cannot commence operations without a CRZ clearance.

But the TNPCB has granted its consent to operate the plant. Unlike the AERB, which is subservient to the Department of Atomic Energy, TNPCB is technically independent. But that independence is only notional. Like the AERB, the pollution control board too is only a crony regulator.

Nityanand Jayaraman is a Chennai-based writer and a volunteer with the Chennai Solidarity Group for the Kudankulam struggle.