Explorations into ‘Islamic Feminism’ and its invisibilisation 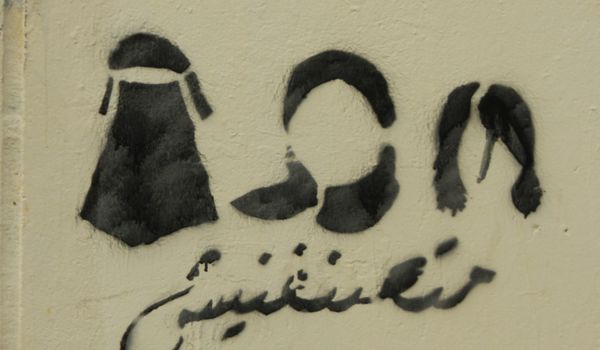 “The Islam of Muhammad banished the idea of supervision, of a police system of control. This explains the absence of clergy in Islam and the encouraging of all Muslims to get involved in understanding the written word.”

–-Fatema Mernissi, The Veil and the Male Elite

Islamic Feminism and why is it equally ‘central’?

Feminism is not a rigid territory, instead it is a porous and fluid terrain full of intersections and diversities.There are as many feminisms as there are women. For the sake of theorizing and creating solidarities between women based on their lived realities, we identify several prominent forms of feminist ideologies globally.

With the rise of ‘western Feminism’ that was exclusionary and solely centred around privileged, white, able-bodied females a need was felt across subaltern groups for forging their own resistance and creating collaborations. Gradually Black Feminism, Dalit Feminism, Feminism of People with Disability, Islamic Feminism etc. arose with the aim to include women from different socio-cultural identities. However a tendency to center the definition of feminism around the ‘western’ notions remains and with rising ‘Islamophobia’ across the world, Islamic Feminism got relegated to the farthest edges and became more restricted.

Moroccan Islamic Feminist Fatima Mernissi in her works brings about the idea of how states feel threatened by the idea of ‘democracy’ as they are male-dominated and derive their social structures from ‘male-centric’ interpretations of Islam. She elaborates upon the idea of true democracy in Islam which is same for men and women. Raja Rhouni who has worked on Mernissi and is a scholar on Islamic Feminist Critical Hermeneutics of Qur’an, advances what she terms as ‘post-foundationalist islamic feminism’ (islamic denoting there is no one rigid understanding of Islam). This denotes the need to move away from one single assumed  and long-held interpretation of Quran and other Islamic texts.

The works of these scholars delineate the idea that Islamic feminism and secular feminism in truth reinforce and intersect each other, as all women live in ‘patriarchal’ societies with their unique norms and forms of oppression. The threat that ‘Islamic’ states and societies feel from the notion of ‘democracy’ is similar to the fear that ay society feels due to ‘feminist resistance’ and to separate the two and see them totally disparate from each other would be fallacious.

However like every subaltern group suffers a stifling of their voices, so do Muslim women. The tendency to speak for ‘muslim women’ and see them as helpless victims who need to be saved as they possess no agency is symptomatic of the ‘saviour complex’ that is quite common in imperialistic  frameworks. The gender opression that muslim women face can be well articulated by muslim women who have lived through the specificities of ‘Islamic patriarchy’. These voices need not be appropriated by ‘savarna’ feminists who feel that ‘muslim women need to be saved’. This struggle is particularly articulated by Lila Abu-Lughod in her book titled “Do Muslim Women Need Saving?” wherein she elaborates the mindset that has justified ‘foreign interference’ including ‘military invasion’ under the banner of ‘rescuing women from Islam’ while the fact remains that muslim women need only as much ‘saving’ as all other women (every culture has their own unique tropes of patriarchal practices and oppression which need to be highlighted equally).

Muslims are being identified under one single umbrella of ‘extremism’ or ‘fundamentalism’. One dominant interpretation of ‘islamic thought’ and the space for feminism in Islam has become mainstreamed. This tendency, especially in conflict zones, where ‘freedom movements’ are amalgamated with ‘gender issues’ and any feminist conversation that takes place revolves around militarization and the subsequent gender violence, creates silences about ‘muslim’ women’s everyday resistance against patriarchal norms and restrictions. Resistance against a single male-centric interpretation of Religious texts has always been the norm. A religion that was born in the form of a ‘rebellion’ and intended to be a ‘revolutionary’ force has stagnated over time as spaces for open discussions closed up.

It is crucial for feminist movements to globally recognize and value the significance of all feminisms, give space to intersecting identities of caste, race, religion, nation etc. It is only when Muslim women and women from other marginalized sections begin to feel ‘at home’ with the ‘white women from Western nations without feelings of shame and exclusion that a global understanding of feminism can be brought in.

212 Cases of sexual assault, rape, murder on Dalit Women in 2014 #Vaw
Does Savarkar’s portrait deserve to be hanged and eulogized in the Parliament?
School survey ties primary scores to caste
Statement Condemning the Maoist Politics of Murder in Chhattisgarh