The deposition by gangster Azam Khan, implicating the then top cop DG Vanzara, has brought unanswered questions on Pandya’s murder to the fore again.
Subhash Gatade 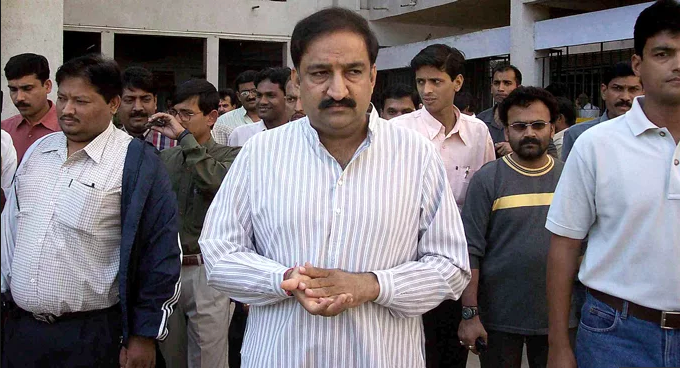 In Act 3, scene 4, Macbeth causes chaos at a celebratory banquet at his castle when he suddenly starts to behave very oddly. Everything starts quite normally. The guests are greeted and they all sit down ready for the meal. One man is absent: Macbeth’s old friend, Banquo. The reason why he is absent is very simple – Macbeth has just had him murdered.

Where Banquo should be sitting at the banquet, Macbeth sees instead his ghost. ..

Will we ever know who really killed Haren Pandya — a senior leader of the Bharatiya Janata Party (BJP) in Gujarat — who also happened to be its Home Minister in late 1990s and early years of 2000? Or will it always remain, to quote police parlance, a “cut-out murder” in which it is not possible to establish the link between the victim and the conspirator or motivator of the crime. (From Hermitude To Holography”. Outlook. April 8,2013. Retrieved 20 September 2016)

The deposition by a gangster Azam Khan — who is at present lodged in the Udaipur jail — in the alleged fake encounter cases of Sohrabuddin Shaikh and Tulsiram Prajapati has brought the issue to the fore again. According to him, the contract to kill Pandya had been given to Sohrabuddin and two others by DG Vanzara, former top cop of Gujarat.

Azam Khan, a one time associate of Sohrabuddin and Prajapati “[a]lso said that while he had told the CBI investigator about it in 2010, the officer had refused to record it as part of his statement.” Interestingly, one can even refer to newspaper archives which point towards similar conclusions quoting sources in the state police.

The gravity of the charges levelled by Khan can be gauged from the fact that he is directly implicating the top cop — who himself was very close to the ruling dispensation in the state then and was discharged from the fake encounter case of Soharabuddin only last year after spending a few years behind bars. Till date, many lower level officials of the police department are still languishing in jail in the fake encounter case.

Forget rejecting outright what Khan has told the court, few in-depth analyses have appeared in Hindi /English publications explaining this 15- year-old case 3 and providing enough hints about the mastermind.

Can we then say that the fresh allegations would prompt the people in power to revisit the case and help untangle few more leads in this unresolved murder mystery of a senior politician, who had started his social-political journey from the Rashtriya Swayamsevak Sangh?

With the ups and downs which the Pandya murder case has witnessed, it is impossible to make any such prediction. But, to begin with, we can at least recapitulate the turn of events:

One, Pandya had allegedly testified before a Concerned Citizen’s Tribunal headed by former Supreme Court judge V K Krishna Iyer about the Gujarat 2002 carnage and the details were definitely not soothing to the ruling dispensation then. Less than three months after the riots, he made similar startling revelations before a leading news magazine, Outlook, which he repeated a few months later as well. What is disturbing to note is that he feared for his life if his identity was revealed.

So, the question arises as to why such a senior state leader of the ruling dispensation feared for his life? And within six months of expressing this fear, he was dead.

Two, Pandya was killed (March 2003) while he was on a morning walk and his body kept lying in his car for around two hours. The persons  who were accused of his murder were released by the Gujarat High Court and the courts heavily criticised the Gujarat police and probe agencies for a botched investigation. (2011). As of now, an appeal is lying before the Supreme Court, challenging the acquittal.

Three,  Pandya’s father, Vithabhai Pandya, always maintained that it was an insider job. Pandya’s wife, Jagruti, was also of the opinion that it was a political murder.  Mukul Sinha, the fearless civil liberty activist and lawyer, had even provided details of how ‘late Shri Vitthal Pandya had gone from pillar to post asking for a free and fair investigation. Despite being a BJP member, he showed complete lack of confidence in the CBI investigation which was at that time under the BJP-led National Democratic Alliance government…’ Sharing other details about his several applications praying for ‘re-investigation before the POTA Court in 2006, which were not entertained’ it also tells us how the widow of  Pandya later strived to reopen the investigation and had ” ..even approached the High Court vide the Sp. Cr. Appl. No.2327 of 2011 seeking re-investigation but it was not entertained as the Supreme Court is seized with the appeal of CBI.’

Perhaps it needs to be mentioned here that Ms Jagruti Pandya, widow of Haren Pandya later joined BJP and is now head of the Child Rights Commission.

Whatever happens in the case — whether Khan’s testimony is rejected once again or a re-investigation is undertaken at the behest of Pandya’s own party people — one can at least revisit the period post-2002 riots on our own, which is dotted with the assassination of  Pandya, a spate of encounter killings, arrest of senior as well as junior-level police officers — the number reached 32 at one stage — and leading politicians from two neighbouring states for their role in these fake encounters, formulation of a ‘counter terrorism plan’ with special focus on religious minorities, etc.

Any close watcher of the Gujarat police would tell you that the top cop (now retired) Vanzara, who is  under the spotlight once again, was DIG of Gujarat police and head of its Anti Terrorist Squad, and till his arrest, he had been privy to the entire goings on in Gujarat since 2002, which included the 2002 riot investigations which were handled by the crime branch, the Pandya murder case and the Akshardham attack, apart from the fake encounters.

It was the same period when Gujarat witnessed a spate of encounter killings that saw 15 deaths. All these killings followed a very similar pattern. Be it the case of Ishrat Jahan, the student from Mumbai, or Sameer Khan Pathan or, for that matter, Soharabuddin, all these encounters took place at night wherein none from the police force received any injuries, despite the ‘terrorists’ being armed with ‘latest automatic weapons’ (as was announced later). The rationale provided for these killings was that they had come to kill Modi and his other colleagues, and had Pakistan connections.

Focusing on one such encounter case, that of Sadiq Jamal Mehtar, who died in police encounter in January 2003, Mukul Sinha had exposed the modus operandi:

How did Sadik become ‘the dreaded terrorist’? The story is better told by Journalist Ketan Tirodkar who admitted to have profiled Sadik as a terrorist on the request of Daya Nayak, the real life Ab Tak Chappan hero, the then PSI of Crime Investigation Unit (CIU), Andheri. Ketan Tirodkar, a confidante of Daya Nayak,  had filed an affidavit in the writ petition (SCrA No. 963 of 2007) filed by Shabbir seeking a CBI investigation into the ‘encounter’ of Sadik. We quote here in below paragraphs 3 and 4 of his sworn affidavit.

3. I say and submit that in my aforesaid complaint in paragraph nos. 7 and 8, I have specifically stated about the manner in which Sadik Jamalbhai Mehtar was deliberately profiled as being a member of Dawood Ibrahim gang by Shri Daya Nayak and me, and further profiled as if he was to go to Gujarat as a contract killer of Lashkar-e-Toiba for eliminating the Chief Minister of Gujarat Shri Narendra Modi.

One can also recall the ‘revelations about the counter terrorism plan of the Gujarat police’ (The Rediff Special, Sheela Bhatt in Ahmedabad, How Gujarat plans to counter terrorists, July 15, 2004) shared by Vanzara himself. It was the same period when the saga of fake encounter killings was unfolding itself.

The implicit understanding (as per the Gujarat government) behind this plan was that the ‘state has become a haven for terrorists’ (read Islamic terrorists)’. In an interview to the same e-mag, the additional CP of Ahmedabad, Vanzara, hammered this point home in no uncertain terms plainly stating that “..After the Godhra carnage and the subsequent riots terrorists of a variety of types and shapes are aiming at Gujarat. Gujarat has become the destination for terrorists.”(The Rediff Interview July 27,2004) .

As a precursor to this plan a detailed survey of the number of mosques, madrasas at the state-level was done and the various Islamic organisations active inside the state and their alleged linkages with other national-international organisations was noted. As per the plan, every policeperson from the constable level upward had been instructed to keep a close watch on the situation at the ground level. S/he had been asked to keep tabs on meetings at masjids and the goings on in the madrasas. Activities of the Tablighi Jamaat were also going to be keenly watched under this plan.

Interestingly, in his resignation letter – which he wrote from jail after remaining there for around seven years – Vanzara had in an indirect way expressed how he and his police officers were just implementing the diktats of the policy formulators in every possible way.

Through his 10-page resignation letter, Vanzara had made some important points. Expressing no regrets over these encounter killings for which he and his associates/juniors were in jail, he maintained that because of these killings only Gujarat remained free from similar terror attacks. According to him the trumpeted success of the ‘Gujarat’s model of development’ was only possible because of the ‘sacrifices made by me and my officers in thwarting the onslaught of initial disorder in the state’. Commenting on the unprecedented situation wherein more than 30 officers working with him were now in jail — which included few officers of the IPS rank also — he maintained that between 2002 and 2007, he and other officers of his ilk “simply acted and performed their duties in compliance of the conscious policy of this government” and yet his political bosses betrayed him.

..the CBI investigation officers of all the four encounter cases of Sohrabuddin (Sheikh), Tulasiram (Prajapati), Sadiq Jamal and Ishrat Jahan have to arrest the policy formulators also as we, being field officers, have simply implemented the conscious policy of this government, which was inspiring, guiding and monitoring our actions from very close quarters”

It is worth underlining that despite Vanzara’s focussed attack on what he called ”policy formulators’, and despite demanding that they be similarly ‘sent to jail’, the state government had rejected the said resignation by not forwarding it to the Central government.

Why was the government keen to retain him in service — despite receiving enough opprobrium because of these encounter killings? Was it because the accused officer wasprivy to secrets which the government did not want to divulge in public?