#India – The Communal Violence Bill must become a Law 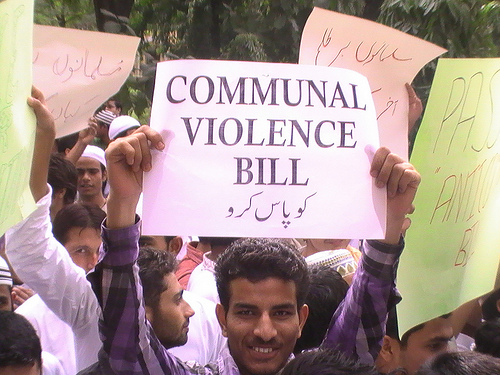 In 1989, Rajiv Gandhi government brought the Scheduled Castes and Schedules Tribe (Prevention of Atrocities) Act to prevent atrocities against scheduled castes and scheduled tribes.  The Act was passed because the normal provisions of the existing laws such as the Protection of Civil Rights Act 1955 and Indian Penal Code were found inadequate to check these atrocities against Scheduled Castes and Tribes. The Act, which has been hailed by the Supreme Court, is an example in our legal system of special legislative provisions for vulnerable groups in response to social reality and experience. In a case challenging the necessity of the Act, the Supreme Court in fact went on to say that, “The offences of atrocities are committed to humiliate and subjugate the SCs and STs with a view to keep them in a state of servitude. Hence, they constitute a separate class of offences and cannot be compared with offences under the Indian Penal Code.”

A similar argument is again being raised against the draft Prevention of Communal and Targeted Violence(Access to Justice and Reparations) Bill (PCTVB)which has been prepared by the NAC. After the recent Muzaffarnagar riots, there has been a demand from many quarters that the government introduce this bill. You can read an analysis of the draft Bill by PRS Legislative Research.

The basic tenets of the Bill are to ensure accountability of public officials, rights of victims and uniform standards for the affected in case of communal violence. The Bill is based on the reality that in cases of targeted identity-based violence against a non-dominant group at the state level (defined as linguistic or religious minorities, SCs and STs in a state) there is incontrovertible evidence of bias by local state law enforcement and administrative machinery. NAC’sExplanatory Note further clears the misconceptions about the Bill. Every episode of communal and targeted violence has been followed by a political and public call for measures to equalise this institutional bias; to correct discrimination by the state in applying laws of the land equally for all, including in prevention of violence as well as in unbiased, impartial investigation and prosecution if violence occurs, followed by comprehensive relief, reparation and compensation afterwards. The Bill therefore proposes correctives to restore equality in the working of the law for these non-dominant groups everywhere.

The Bill does not seek to give additional powers to the state. This is because the administration already has adequate powers to prevent and control communal and targeted violence when it chooses to do so, and thus it is not considered necessary to further enhance any powers. Communal and targeted violence spreads mainly because the public officials charged with protecting and preventing, either fail to act or act in a biased manner.

The purpose of the Bill is to end this “tradition of impunity” which produces riots. By not curbing it, the state ensures that such violence continues. It has been as true of post-Babri riots in 1992 as of the Gujarat riots in 2002. One of the conclusions of a study by Dr. Vibhuti Nariain Rai, a Police officer, was that no act of communal violence can go on beyond 48 hours unless the administration is complicit in the violence. Academic studies of riots in India by Ashutosh Varshney and Steven Wilkinson have also arrived at similar conclusions. This Bill attempts to address this delicate area of our political and administrative reality.

This is the major highlight of the Bill—to ensure the accountability of the officials whose act of commission and omission are at the root of the continuation of the targeted violence. Often, these officials are acting at the behest of the political leadership. While it is important to hold officials accountable, communal violence cannot be prevented without holding those political players who encourage and practice communal politics, accountable. The attempt of the Bill is to hold the political leadership accountable for its acts. Another significant point in the Bill is action against the Hate propaganda against the vulnerable communities, and their economic and social boycott.

It is nobody’s case that this Bill will end crime against minorities or riots in one go. But it will raise the certainly cost of administrative and political inaction during riots. This will prevent the repeat of another 2002 Gujarat riots elsewhere in the country.

Those opposing the Bill have made the argument that it impinges upon the federal structure of the country. Nothing could be farther from the truth. The proposed National Authority for Communal Harmony, Justice and Reparation (NACHJR) is like the National Human Rights Commission, in that it does not take over any existing powers of any public official or institution, nor supersede the existing law enforcement machinery. The advisories and recommendations of the NACHJR are not binding on state governments. Law and order remains entirely with the state government. All powers and duties of investigation, prosecution, and trial remain with the state governments.

Another fear voiced against the Bill is its likely misuse to threaten and blackmail other communities. The same argument was made against the SC/ST Atrocities Prevention Act of 1989 but those fears have been largely unfounded. Yes, misuse of any law does remain a possibility but the way out is not to throw the proverbial baby with the bathwater. And if misuse of a law was the reason for not enacting it, how does the BJP justify its constant demand for reenacting the POTA, a law proven to have been misused repeatedly against minorities?


In any case, the draft Bill has to be debated in the parliament before being promulgated as an Act. As with any other law, the best place for major political parties to raise objections and shape the Bill is the parliament. That is how mature democracies function. Let us hope that the Communal Violence Bill is brought in the next session of parliament and becomes an Act. After the RTI, NREGA, RTE, Land Acquisition Act and Right to Food, it would be the culmination of another promise made by the Congress-led UPA.