India – The diminishing of media power-Denied or shut up 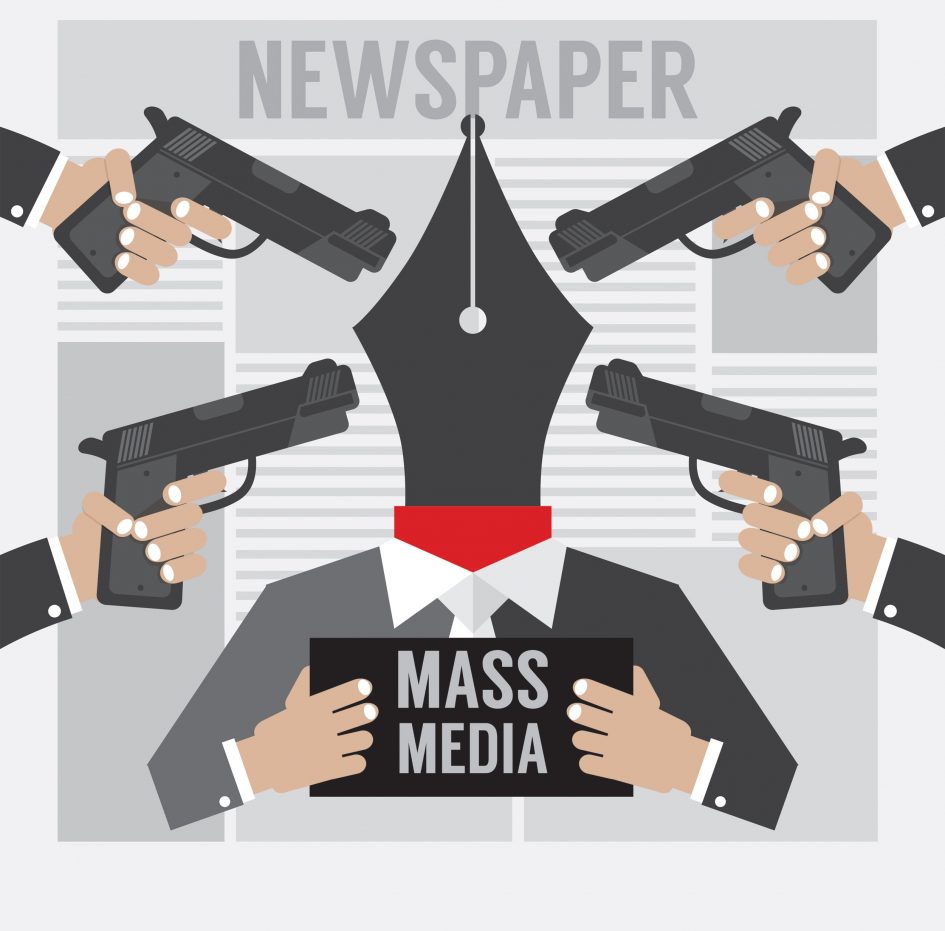 It is difficult to keep telling yourself that you are one of the pillars of democracy when your freedom and viability are threatened. Even as journalists were cut to size in many different ways in 2019, the news industry itself was squeezed and forced into greater dependence on readers and viewers on the one hand, and the government on the other. If the first meant skewing your product to find a market in a polarized environment, the second meant playing ball with an interventionist government that has not demonstrated much use for an independent press.

Enough happened over the year to contest the very notion of media power. Dogged investigations done by journalists changed little on the ground. Neither, for instance, with regard to the Rafale deal, nor in the matter of the electoral bonds scheme. The government simply brazened its way through. And the prime minister, Narendra Modi, joined other world leaders in asserting the irrelevance of the mainstream media. He tweeted, as did the American president, Donald Trump, when he needed to communicate. It took both self-belief and tenacity to peg away at one’s journalism.

Politicians now need the media less because they have found other ways to communicate with voters. Social media helped diminish the political role of the traditional fourth estate in an election year. An Indian prime minister who finds conventional media expendable swept the polls after a five-year term during which he held no press conferences. And attended one called by his party chief but took no questions.

Modi’s strategy honed during his first term was to simply bypass the media he does not need. His government shrank access to reporters noticeably, with cabinet colleagues and the bureaucracy being told to simply communicate less through the privately-owned media. Internet access doubled in those five years, and the prime minister has learned, as the Facebook CEO gushed to an interviewer, “that you can use Facebook to connect directly with your voters”.

Trump meanwhile discovered that using the term fake news was a good way to discredit the mainstream media. The New York Times counted that he had tweeted ‘fake news’ more than 600 times in his tenure by November this year. And had set a trend for world leaders elsewhere.

The challenge for the media in the year gone by has been twofold. On the one hand there was a convergence of developments that weakened media freedom. It was an extraordinary year which saw the State use violence against reporters, threaten them with defamation, cut off communication access making it impossible for the media to function, impose a peacetime communications blackout on an entire state, and dilute the right to information law which gave public access to government records.

On the other hand, the Modi government has not been shy about arm-twisting the media in the run up to the May elections or after it. It used denial of government advertising as a tool to dent the commercial viability of media organizations it is displeased with. In June, Reuters reported a freeze in the advertising given to three big newspaper groups, including the one that publishes this paper. The government also leaned on private advertisers who advertised on news channels it considers adversarial. Media groups that have taken to sponsored events to shore up revenues in a saturated market have quickly learned that to have participation by the political leadership in events organized by the group, you need to be in its good books.

Some television channels scrambled to stay in favour, doing gratified interviews granted by the prime ministerial candidate, demanding to know when a temple would be built at Ayodhya, and echoing the ruling party’s triumphalism at the abolition of Article 370: “Today in the hearts of every Indian, and yours and mine, there is an overwhelming unbelievable sense of true pride, at the fact that in our lifetime, before our very eyes, the integration of Jammu and Kashmir has actually happened,” said one television channel on August 5, 2019.

Up against a government that intimidates the media constantly via high-level phone calls to owners and editors, and advertises its displeasure by denying advertising, sections of the media struggled to do their job. But you need to have a job before you can be brave. The year has seen retrenchments, denial of increments and bonuses, and closures of media outlets.

When the State signals that journalists are no longer a protected species, newsgatherers become more vulnerable. A reporter for The Hindu detained in a Lucknow police station during the Citizenship Amendment Act protests tried to plead that he was a journalist doing his job. He was threatened with gratuitous violence and told, memorably, “You can keep your journalism to yourself.”

Six months earlier, Yogi Adityanath’s government arrested a reporter for sharing a tweet in which a woman claimed she was in a relationship with the chief minister and wanted to marry him. The Supreme Court had to intervene before he was released.

There were 36 attacks on journalists in India this year up to the middle of December according to a report just out, and the role of police in obstructing reporters grew. A year that began with pellets being shot at photojournalists in Shopian in January ended with the police reportedly hitting a woman journalist, who was covering the Jamia Millia Islamia campus protests, with a baton, pulling her hair and breaking her phone. (IndiaToday.in)

Amazingly, the State also threatened the media with defamation. In Andhra Pradesh, the Jagan Mohan Reddy government took the unprecedented decision of empowering its secretaries to initiate legal proceedings against media outlets which publish “baseless and defamatory” news.

It is hard for the media to function, let alone feel empowered, when access to communication technologies is cut off. Internet shutdowns were so widespread that it was reported in December that the Peoples Daily in China had cited India as an example to justify internet shutdowns. They peaked countrywide with the December protests against the CAA. One newspaper mapped the shutdowns across the country between December 11 to 20 — 24 districts in Uttar Pradesh, 11 in West Bengal, 10 in Assam and so on. Kashmir has remained shut down for five months, with many journalists losing their source of livelihood.

Another form of denial of access came from the weakening of the Right to Information Act. The second Modi government lost no time in passing amendments which diluted the independence of the Central Information Commission, and gave the government powers to decide the salary and service terms of the statutory body head and its members.

Finally, there was heightened self-censorship, which is the very antithesis of media power. The bigger the media group, the more likely it was to self-censor so as to not displease the government.

The most precious example of self-censorship came at the end of the year, when the industrialist, Rahul Bajaj, did some plain speaking at an event organized by the Times Group, attended by the government’s leading lights. He spoke of the lack of confidence among corporate organizations to criticize the Central government, and the absence of effective action against lynchings, among other issues. A major newspaper next morning only reported what the home minister said in the government’s defence. There was no mention of Rahul Bajaj or his comments.

The author is a media commentator and was the founder-editor of TheHoot.orgAlso Read