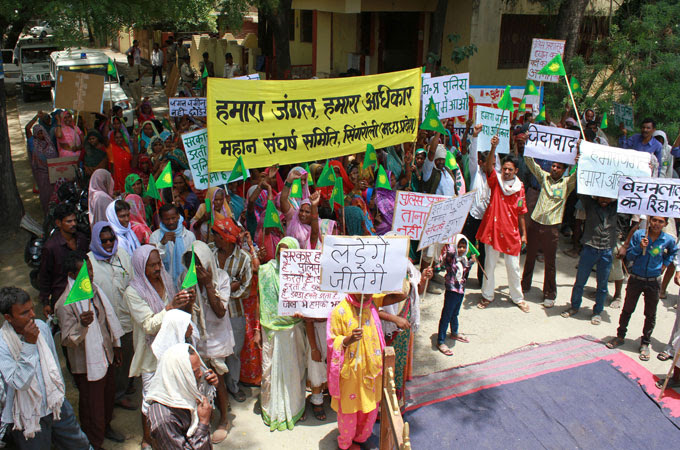 Singrauli, India – Tribal people living in the central Indian state of Madhya Pradesh are in the vanguard of last ditch efforts to save the famous Mahan forests from being wiped out.

They say that construction of a power plant under a joint venture between two private companies – Essar and Hindalco – would lead to the destruction of the oldest and the largest salwood forests in Asia.

Campaigners are now resisting the plans in Singrauli district – India’s energy capital, supplying 10 percent of the country’s coal – and asserting rights to the forests that provide sustenance to more than 60 villages.

“We know that justice has not been done with these people”, Priya Pillai, a senior campaigner with Greenpeace India, told Al Jazeera. “The government has given clearance for mining without even thinking about thousands of people who depend on these forests.”

The London-listed multinational conglomerate Essar and the Indian aluminium group Hindalco came together in 2006 to form a $8bn joint venture, Mahan Coal Limited, to exploit coal seams in the area granted to them by the government to supply two large power plants.

However, the coal mining will displace residents of at least 14 villages dependent on the Mahan forests for natural produce, including mahua, tendu leaves and karanj that are crucial to their livelihoods.

“We collect mahua and tendu from forest as non-timber forest produce and then sell them in the market. This way we are fully dependent on the forest round-the-year”, said Kanti Prasad, a local resident from Amelia village.

“How can we leave it? We will ultimately die without these forests”.

The mining is also expected to result in the felling of about 400,000 trees crucial to the area’s ecological balance and to destroy an important corridor between wildlife habitats. According to the Global Register of Migratory Species, over 102 migratory species are present in the area.

Residents have formed the group Mahan Sangharsh Samiti (MSS) to resist the multinationals’ plans and to assert their rights to the forest in a campaign that has now extended to the state capital Bhopal and New Delhi.

“The mining in the area will render us homeless and make basic amenities like water scarce” said Ujiraj Singh Khairwar, a resident of Amelia, the village that will be worst affected by the mining.

“We have been dependent on the forest for generations. How can we leave it at once and move to other places?”

Earlier this month supporters of MSS and Greenpeace activists were arrested after moving into the forest area to prevent trees being marked for felling by company officials.

Harish Singh, a local resident, told Al Jazeera: “We are ready to give our lives for these forests. Ultimately we will die if these forests are destroyed for mining. We cannot go anywhere else.”

“We wanted the government to be sympathetic towards our demands and not to behave the way they have been doing. We still believe that our fight will continue and bear fruitful results.”

In 2011 former Environment Minister Jairam Ramesh initially rejected the plans, stating: “The coal block is undoubtedly in a biodiversity-rich area. It will destroy good natural forest cover and interfere with wildlife habitats.”

However, the application was later granted in principle on the condition that studies were carried out, before gaining final approval in February this year from the then Environment Minister Veerappa Moily.

Locals allege that clearance was granted on the basis of a forged resolution by a special village council meeting in Amelia on March 6 last year attended by only 184 people. The copy of the resolution shows 1,125 signatures – which villagers claim may have been forged.

In February MSS filed a petition with the National Green Tribunal (NGT) – which resolves disputes over environmental protection and forest conservation – challenging the forest clearance granted for the Mahan coal block.

This week, the Madhya Pradesh state government gave an undertaking to the NGT that there will be no felling of trees in Mahan until October.

Ramakant Tiwari, the chief executive of Mahan Coal Limited, told Al Jazeera that the company had obtained all the necessary permissions for forest clearance from the environment ministry, approvals for mining from the coal ministry, and the backing of the local state administration.

“We intend to make the project operational soon and from now onwards we expect the project to progress” he said.

However, the company could face another hurdle if the Singrauli district administration seeks another round of consent from villagers.

The village council could be asked to vote on the project a second time in the wake of the allegation that the earlier consent was forged.

Singrauli Collector M Selvendran, the district’s chief administrative and revenue officer, said: “The law will take its own course. We respect the law and hope that all the parties would also do the same.”