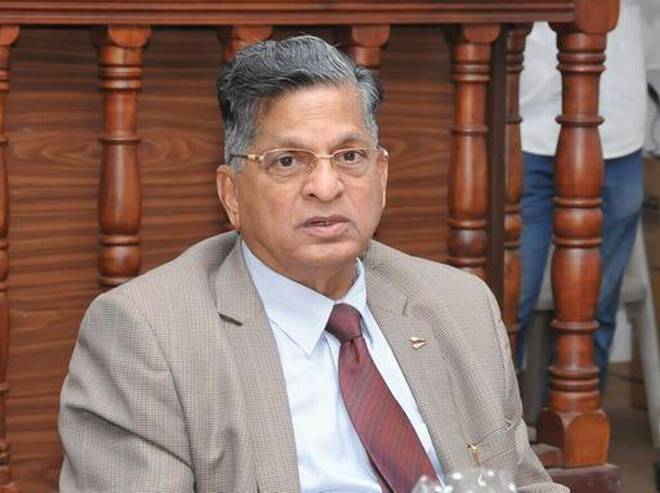 Sources said Sharma entered the office on the pretext of lodging a complaint. Five minutes later, the staff outside heard screams. When they rushed in, they found Mr. Shetty, who was stabbed thrice, in a pool of blood and rushed him to the nearby Mallya Hospital. Doctors confirmed to The Hindu that Mr. Shetty’s condition was now stable.

Police overpowered Sharma and took him into custody. They are trying to ascertain the reason for the attack. tejasjpeg
Tejas Sharma, who stabbed Karnataka Lokayukta being detained by Police in Bengaluru on Wednesday. | Photo Credit: M.T. Shivakumar
Upa Lokayukta Subhash B. Adi was not present at the office at the time of the attack, the sources added.

Speaking to reporters outside the hospital, Mr. Siddaramaiah said that the assailant seems to have entered Mr. Shetty’s chamber with an intention to kill. He said he had directed the police to ascertain if there was any lapse in security arrangement. “The gunman was outside the chamber, when the assailant stabbed Mr. Shetty inside. The police have arrested him and investigation is on,” he said and added that the doctors informed him that the Lokayukta was now out of danger.

Former Lokayukta Santhosh Hegde described the attack as an unfortunate incident and said it was a security failure. “There’s a metal detector and the police is supposed to use a hand-held metal detector to frisk to visitors. In this case, they have clearly not done it,” he said.

Expressing shock over the attack, the opposition BJP has maintained that the episode was a testimony to its stand that law and order situation in the state had collapsed. “The fact that a miscreant has courage to attack the Lokayukta in his office is an indication of the weak law and order system,” BJP State President B.S. Yeddyurappa stated in a release.

He urged the government to act sternly against the miscreant so that it would be a warning for others against indulging in similar incidents.