What’s happening to the legacy of Dr B R Ambedkar at the hands of the RSS/BJP and the Congress on the occasion of his 125th birth anniversary is perhaps the biggest travesty of social and political history of India.

The man, an intellectual giant and peerless social reformer, who fiercely fought Hinduism till his death and was highly critical of Gandhi and the Congress, is today being misappropriated by both the Sangh Parivar and the Congress. And both are making elaborate plans to celebrate his anniversary.

The RSS will come out with commemorative collector’s editions of its mouthpieces Panchjanya and The Organiser, while the BJP will roll out year long celebrations with a particular focus on social welfare. The Congress, under a special committee chaired by Sonia Gandhi, also will ride on the glory of Ambedkar throughout the year. Prince Rahul will join the misappropriation plan. 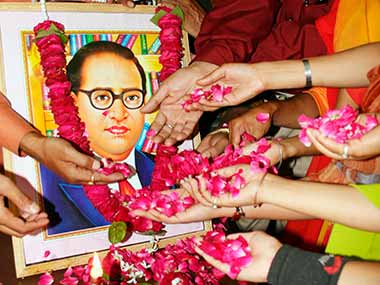 The most outlandish and fallacious claims have been made by the RSS. It has said that Ambedkar’s work was similar to that of its icons such as Veer Savarkar and Madan Mohan Malaviya and that he even supported its polarising idea of “Ghar Wapsi”. The laughable irony of this claim is that Ambedkar’s politics was anchored in his uncompromising opposition to Hinduism, particularly the practice of caste or “varnashram”. He was so vocal in his antagonism to Hindu religion that he converted to Buddhism a few months before his death. While becoming a Buddhist, he had said that he felt free by renouncing Hindu religion and was no more an untouchable.

But an opportunist RSS sees Ambedkar’s lifelong fight against Hinduism as an attempt to reform the religion. In its stilted eyes, Ambedkar is a Hindu reformist. It doesn’t see his sufferings or the subjugation of Dalits at the hands of caste Hindus, but find great affection for Hinduism in his conversion to Buddhism because he turned down the overtures of Muslims and Christians. For the RSS, a person who didn’t want to convert to Islam or Christianity is a loyalist of the Hindus even though he was trying escape the cruelty of the Hindu caste-system.

The RSS has one more reason to misrepresent Ambedkar – that he was highly critical of the Muslims and did not support Pakistan. Ambedkar indeed went to great lengths to assert that “Muslim Society is even more full of social evils than Hindu Society is” and how it sanctioned and perpetuated slavery and subjugation of women. He was highly critical that there was no organised social reform movement in Islam. He also said that a “Muslim woman is the most helpless person in the world” because “Islam has set its seal of inferiority upon her, and given the sanction of religion to social customs which have deprived her of the full opportunity for self-expression and development of personality.”

These words do qualify him to be a severe critic of Islam and do make him a darling of the RSS, but what’s conveniently obscured is that in the same breath he had said that “in a ‘communal malaise,’ both groups (Hindus and Muslims) ignore the urgent claims of social justice.”

Social justice and social equality for all had been the centrepiece of Ambedkar’s politics and reforms agenda, and he believed that they had to precede any form of political freedom. He famously had said that “a democratic form of government presupposes a democratic form of society. The formal framework of democracy is of no value, and would indeed be a misfit if there was no social democracy.” He didn’t value India’s freedom that was not consistent with its social freedom.

This is the point that Gandhi and the Congress refused to acknowledge. The Congress and its freedom fighters thought Ambedkar was a lackey of the British when he put social democracy before political democracy and engaged with them in pursuance of his agenda. He was certain that the untouchables, or the “depressed classes” as he called them, will never get justice if the British left without giving them their due. Political freedom, as Gandhi and the nationalists saw, had little significance to him. As he had said, “the politicals never realised that democracy was not a form of government. It was essentially a form of Society.” He also had said that the “animosity of the Congress Press towards me can to my mind, not unfairly, be explained as a reflex of the hatred of the Hindus for the Untouchables.”

Clearly, for him, the Congress and the Hindu-forces represented the same side of the coin.Ambedkar didn’t see the subjugation of the untouchables by caste-Hindus and the lack of political freedom as two separate situations. For him, if the nation wanted to be free, it had to be free from both. “It may not be necessary for a Democratic society to be marked by unity, by community of purpose, by loyalty to public ends, and by mutuality of sympathy. But it does unmistakably involve two things. The first is an attitude of mind, an attitude of respect and equality towards their fellows. The second is a social organisation free from rigid social barriers. Democracy is incompatible and inconsistent with isolation and exclusiveness, resulting in the distinction between the privileged and the unprivileged.”

His clash with Gandhi in fact combined both – the tyranny of the Hindu caste system and the wilful neglect of social democracy. Nothing can be more direct to show that the ideologies of Gandhi and Ambedkar were at loggerheads when it came to the former’s belief in the caste system: “I am a Hindu, not merely because I am born in the Hindu fold, but I am one by conviction and choice. There is no superiority or inferiority in Hinduism of my conception. But when Dr. Ambedkar wants to fight Varnashram itself, I cannot be in his camp, because I believe Varnashram to be an integral part of Hinduism.” In other words, Gandhi believed in the caste-system that Ambedkar fought against throughout his life.

Today, the Congress and the RSS/BJP indulge in historical revisionism for political aggrandisement. A mendacious BJP wants to usurp and misrepresent Ambedkar’s legacy by making invidious comparisons to attract Dalit votes and to take on the BSP in UP, while a status quoist Congress wants to continue misleading its tradition Dalit vote-base.

Unfortunately, it’s not just the Congress and the BJP alone that do injustice to Ambedkar’s legacy, but also Dalit parties such as the BSP. They had long since compromised with Hindutva forces, caste-Hindu organisations and Muslim fanatics, and what’s happening now is another political farce in a farcical democracy. An what we lose in the process is a great opportunity to revive his social reformist politics and discover the immensity of his scholarship.