Newsroom gender gap: Men get over 80% of TV panel slots, 75% of bylines 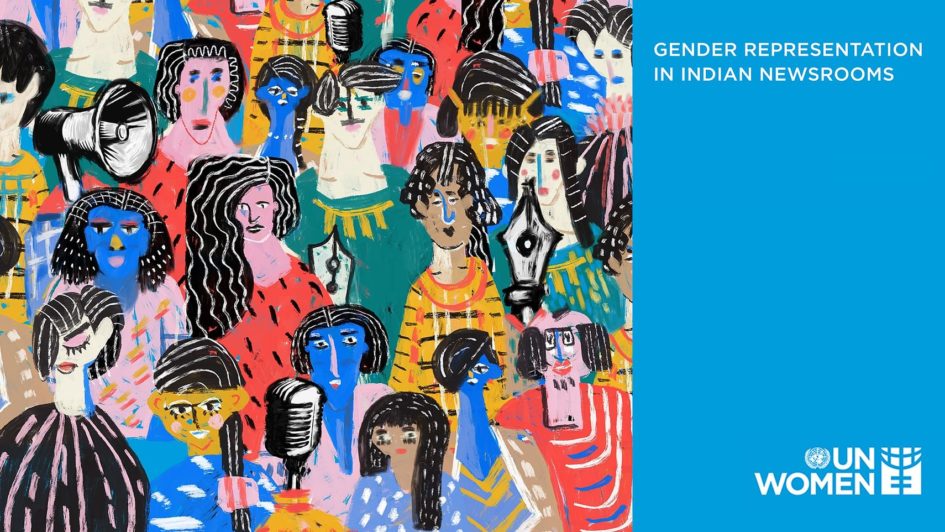 A report by Newslaundry in partnership with UN Women and Hyatt finds that men still dominate newsrooms across print, digital and broadcast media.

Conversations have been initiated across the world about gender equality, but the Indian media continues to lag behind.

Two years ago, Newslaundry in partnership with UN Women published a report titled “Gender Inequality in India Media”,which noted that barely five percent of newsroom leadership positions were held by women for the time period October 2018 to March 2019.

Across mainstream English and Hindi newspapers, including the Indian Express, Times of India, Dainik Bhaskar, Amar Ujala, three out of every four news articles are authored by male journalists. On TV debates, from NDTV to Republic, men dominate the screen; with only one of out five panellists appearing in English debates being women. In Hindi debates this number is one out of 10.

These are some of the preliminary findings from “Gender Inequality in Indian Media 2021“, published by Newslaundry in partnership with UN Women and Hyatt. The study looked at gender representation across Indian newsrooms, collecting data from digital, broadcast and print media between August 2019 and July 2020. This year’s survey included qualitative information obtained from journalists through questionnaires and interviews.

Here’s what we found.

A total of 6,467 panelists appeared in 1,295 English news debates across the period surveyed. Eighty-five percent of the panelists were men. Hindi channels fared much worse; only nine percent of panelists on 985 debates were women.

When it came to who talks about what, women’s voices were all but missing on debates about Covid. During 271 Covid-related debates conducted on the surveyed English news channels, 1,300 panelists appeared of whom only 14 percent were women. On Hindi channels, out of 125 Covid-related debates, women made up eight percent of panelists.

The study categorised topics for debates into 16 sections. Most debates were on government policy, electoral and party politics, and law and order. On English channels, discussions on global news, defence, and legislative matters had 90 percent male panels while the maximum number of women – 32 percent – were found in debates on topics of human interest or entertainment.

In Hindi, men constituted 90 percent of panels across all topics. Again, women were most likely to be invited to panels to talk about entertainment and human interest stories.

Across the 14 channels surveyed in both English and Hindi, there were zero women on sports panels.

The study collected data from 21,988 articles published across 11 newspapers in English and Hindi. These included news reports, opinion pieces, and editorials. Men authored 74.5 percent of all articles, while women authored 25 percent of the articles. The author’s gender identity could not be determined for 0.5percent of articles.

The study also analysed the newspapers page-wise and found that nearly all the front pages in Hindi papers were written by men. In Prabhat Khabar, for instance, there were 77 men who had bylines on page 1, but just one woman. In all four Hindi papers, women wrote just six out of 85 articles on business.

Representation in English newspapers was better: 29 percent of all business stories were written by women, but 75 percent of the editorial pages were dominated by men.

Out of the total articles surveyed, 18 percent were about Covid and women wrote 36 percent of these. While 52 percent of all Covid articles in Times of India were authored by women, none of the 24 articles on Covid in Dainik Bhaskar were written by women.

Like its broadcast counterparts, newspapers continued to employ men to write articles on sports. Under six percent of the total stories on sports were written by women.

Similar to last year’s findings, women found more representation in digital media according to the 2021 report. Of 10,473 articles analysed in the digital space, 41 percent were written by women. It should be pointed out, though, that the distribution varies across outlets. The Print, for example, has 61.4 percent of its stories written by women while Swarajya has just 14.7 percent.

Digital media’s Covid coverage saw women writing half of the 2,160 articles on the topic. While 60 percent of Covid-related articles in Print, News Minute and Quint were written by women, both Swarajya and Newslaundry Hindi only had seven percent of their Covid stories written by women.

The survey also considered gender composition of newsrooms, and how digital newsrooms in particular have subverted the usual trends. The News Minute, for example, cofounded by Dhanya Rajendran and Chitra Subramaniam, has a total staff of 30, of which 65 percent are women. Leadership roles for women in newsrooms mentioned Rajendran, Quint’s Ritu Kapur, Mojo Story’s Barkha Dutt and independent journalist Faye D’Souza.

Among community and commercial radio stations, the report suggested fairly equitable gender representation. According to a survey of community radio stations by Ideosync Media Combine, out of 35 radio stations that employed a total of 250 staffers, the number of women employed was slightly higher than men. However, 75 percent of the managers were men. The surveyed community stations also employed 700 unpaid volunteers of which 350 were women.

Among the 11 commercial radio stations surveyed, radio jockeys were found to be nearly equal in terms of representation.

The study collected 81 responses – 51 from newsrooms and 30 from freelancers – via a questionnaire circulated on social media. The questionnaire established a demographic account of the respondents, their subjective experiences in the media, the impact of Covid on the industry, and sexual harassment in the workplace.

On safety in newsrooms, the survey investigated the occurrence of predatory behaviour in the workplace and found that while 60 percent of respondents had never faced such instances, the remaining 40 percent said they had faced such behaviour before. Fifty percent of the respondents said there had been no training about sexual harassment at their workplace over the last two years.

None of the respondents said they had faced sexual harassment in the workplace.

Finally, a survey was also conducted at Newslaundry itself. Almost all the employees felt in varying degrees that genders were represented well in their organisation. However, the highest point on the seven-point scale, signifying very well-represented, was chosen by five male employees. It was also found that most of the middle management roles were taken up by men.

Half of the women employees at Newslaundry were unaware of the existence of the ICC.