Rasputin challenge: Why are these Medical students in scrubs trending? 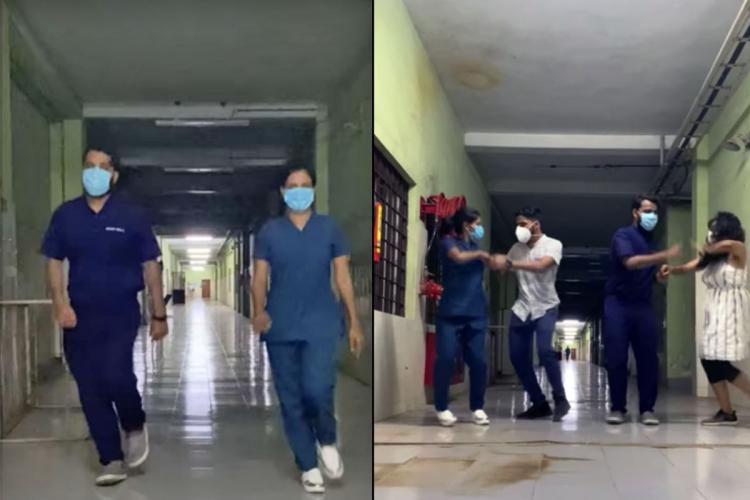 Dancing to the tunes of 1970s Boney M classic ‘Rasputin’, Janaki and Naveen, two medical students from Kerala’s Thrissur Medical College, have shaken the social media for more reasons than one.

The 30-second-long video of their dancing in scrubs, shot by a friend, was posted in the social media and went viral on the internet, particularly after a lawyer with leanings to the right wing warned Janaki Omkumar’s parents, citing the religion of Naveen Razak.

But the dancers chose to ignore what the lawyer has been driving at and also the subsequent heated discussion online about their religion, even as scores of others have expressed solidarity with them.

Now, Kerala Police too has latched on to the dance video in an endeavour to spread awareness among the people on the need to get vaccinated against the novel coronavirus.

It posted a video on its twitter handle of two vials of Covishield and Covaxin vaccines moving to the tunes of one of the band’s popular number.

‘Get Vaccinated From Nearest Vaccination Centre. Crush The Curve.Back to Basics. #keralapolice #CovidVaccine (sic),’ Kerala Police’s tweet read, using the contemporary way of promoting the vaccines among the public.

Meanwhile, Naveen got over 6.7 lakh likes for the video he posted on his Instagram page and Janaki posted the video on her Youtube channel. It was watched by nearly five lakh people.

‘A usually dead phone of mine and a pretty not-so-frequently active social media user myself have been on the buzz for the past few days,’ Naveen wrote on his instagram page.

Both Naveen and Janaki sought to ignore the comments made by the lawyer about their dance.

As the social media started discussing their religion, fellow students of Janaki and Naveen posted another video with more students dancing to ‘Rasputin’.

They all appeared in a video wearing their scrubs and masks.

Naveen and Janaki made an appearance in the video for a few seconds.

What did some Kerala medical students do when a BJP sympathiser communally attacked their two friends for dancing to Boney M’s famous Rasputin song? They, too, danced. After the video of two medical students from Thrissur Medical College — Naveen K Razak and Janaki M Omkumar — dancing to the Rasputin song with their impressive dance moves went viral, an advocate and BJP sympathiser named Krishna Raj ‘advised’ Janaki’s parents to be ‘careful’ as a Naveen is a Muslim. As his Facebook post received flak, messages of solidarity, too, poured in for the two medical students, with a group of other medical students protesting the hate message by emulating the viral video.

In a video, which has been posted on Aikya College Union 19-20, the official Facebook page of the college union of Thrissur Medical College, a few students can be seen emulating the same dance moves by Janaki and Naveen. The students are dancing in their blue scrubs and masks. In the final move, Janaki and Naveen, too, join them in white casual outfits.

The video was accompanied by a strong message against hate speech: “If the intention is hate, then the decision is to resist. #resisthate.” Taking a dig at Krishna Raj for his “effort” to find Naveen’s surname, the students tagged the respective Facebook pages of every person in the video, including the medical students who shot and edited it. “You will find more details of each person if you search the head (first name) and tail (surname) of their names, to put a Facebook post accordingly,” the post read.

Naveen and Janaki first put the viral video as part of the popular Rasputin TikTok dance challenge. People from across the world danced to a portion of the song and posted it on the video-sharing social media network. Janaki and Naveen’s video received appreciation from all quarters and was widely shared as well.\

On Thursday, Krishna Raj, who has sizeable followers on Facebook, decided to give a communal spin to the viral video, saying that he “smells something wrong” in two medical students dancing. He even remarked that if Janaki’s parents are not careful, “they won’t have to be sorry later, as Nimisha’s mother has proven.” Nimisha alias Fathima was one of the women who had converted to Islam and left Kerala between 2016 and 2018 to join the terror outfit Islamic State in Afghanistan.

Responding to the post, Naveen told the media they are not bothered by the communal remarks as they are the new generation. Janaki, too, said that she and her family considered the comments not worth reacting to.