For a man who was the face of pro-bono legal defense of terror accused in the country, his family’s wait for justice has been excruciatingly slow. Shahid Azmi was shot dead on February 11, 2010 and eight years, and at least 12 court transfers later, the trial of the four men accused of murdering him is yet to begin.

While two of the accused – Vinod Vichare and Pintu Dhagle – have been granted bail, two others – Devendra Jagtap and Hasmukh Solanki – continue to be behind bars. Shahid’s youngest brother Khalid, who has followed in his brother’s footsteps to become a lawyer, spoke to Mirror about the delay in starting the trial. “The case has been transferred from one court to another at least 12 times in these years. That coupled with the applications filed by the accused added to the delay.”

“After the murder, our local Bar Association decided not to represent any of the accused, as the incident was a shock to us all,” said advocate Ajay Tripathi, one of Shahid’s closest friends, who also got Sanad (licence to practice) on the same day as Shahid. “While this sent a message out, the court was forced to adjourn the case several times, as the accused said they were yet to hire lawyers,” he added. Tripathi fears that it will be the accused who will ultimately benefit from this delay.

Santosh Shetty, a former gangster, was accused of having been given the contract to murder Shahid. However, with little evidence against him, he was discharged in 2014. On a petition filed by the accused, the trial has now been expedited. Even then, it has been over a year since the trial was slated to begin, but there has been no development since. On February 8, 2018, the first witness was supposed to depose, however the court was on leave.

Azmi, whose life inspired the critically-acclaimed film Shahid, represented the July 2006 train blasts accused in court. He convinced a trust Jamiat-Ulama-i-Hind to bear the legal expenses to approach the Supreme Court to challenge the validity of a section of the Maharashtra Control of Organized Crime Act (MCOCA) in their case.

His association with the trust continued through the 26/11 trial, where he represented Faheem Ansari and Sabauddin Ahmed, who had been accused of preparing maps used by the terrorists. Shahid’s arguments led to their acquittal in 2010, which was ultimately upheld by the Supreme Court.

Shahid continued to do his bit for the men he believed were falsely implicated by the investigating agencies, until his last breath on February 11, 2010, when he was shot dead in his office by men who had approached him under the guise of seeking legal advice.

“It’s been eight years but there isn’t a day that goes by when we don’t remember him,” says his brother, adding, “We are grateful we aren’t alone while doing this. Several programs are held throughout the country in his memory. There are at least three this year as well.”

His mother Rehana, 62, has not given up hope yet. “The trial may have been delayed but I believe in Allah, justice will be done.” She has one question for her son’s killers, “Can you ever sleep at night?”

Saying that every home deserves a son like Shahid, she said, “Even on the day he was murdered, Shahid rushed to his office because he got a call for help. The people asking for that help then murdered him. Those men didn’t just kill my son, they killed humanity.” 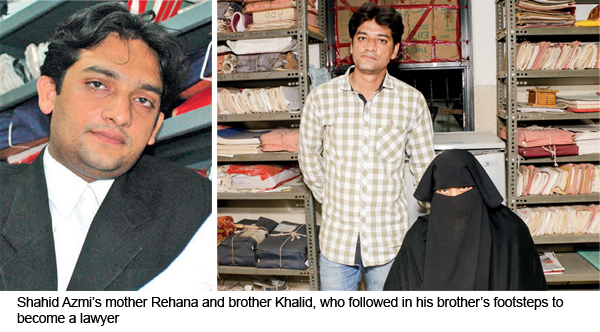 Excerpts from Six Minutes of Terror, The Untold Story of the 7/11 Mumbai train blasts

“Heads turned as a young man wearing sleek black pants and a crisp black coat walked down the corridors of the Mumbai City Civil and Sessions Court. Twenty-nine-year-old Shahid Azmi’smother, Rehana Azmi, would lovingly call him Fardeen Khan, after the Bollywood actor known for his boyish looks and inimitable style. Shahid was a rookie, but no one was surprised when he decided to defend Faisal Shaikh, Muzzammil Shaikh, Naved Khan and Zameer Khan in the 7/11 blasts case. Softspoken, but wildly passionate about his work, Shahid was a lethal combination. After all, he had been to hell and back.

Disillusioned after the 1992 riots, Shahid joined the Jammu Kashmir Liberation Front ( JKLF), a militant organization based in the Valley. In only a few months, the fifteen-year-old returned to his mother and three brothers, to their home in Govandi, one of the largest Muslim pockets in Mumbai. Shahid often admitted that he ‘couldn’t be a radical’. But his past followed him to Mumbai. The police detained him and charged him with several sections under the stringent Terrorist and Disruptive Activities (Prevention) Act in 1994.

Just like under the Maharashtra Control of Organized Crime Act, a confession under TADA could be used against him. Incorrect entries in the police files showed that the teenager had been apprehended from a Delhi market three days after he was actually detained in Mumbai. Shahid was accused of conspiring to murder Jammu and Kashmir political leader Dr Farooq Abdullah and was imprisoned for five years. In his time at Tihar jail, a maximum security prison in Delhi, Shahid continued his college education from Indira Gandhi National Open University, a distance learning university that has long been a haven for many prisoners hoping to reintegrate into mainstream society after they are released from the prison. Although Shahid had been convicted by the special TADA court, his sentence was overturned by the Supreme Court a year later as the police had no evidence but a ‘confession’ against him.

Shahid’s tryst with the law did not end there. After his release, he simultaneously completed a course in journalism and a degree in law from Kishinchand Chellaram College in Mumbai. At university, Shahid spoke with a slight stammer, talking only when spoken to. As a lawyer, he saw every client as a victim of a communalized police force. He paid the police back for what he had gone through; he broke down every case to the minutest of details, astonishing everyone with his grasp of the art of crossexamination.

As Shahid’s reputation in the courts grew, his family moved from Govandi to a more respectable address at Taximen’s colony in Kurla, near his new office. Shahid’s success was becoming apparent. He worked on cases until late in the night, and helped free more and more people who had been held under the now repealed Prevention of Terrorism Act (POTA).

By 2006, Shahid had more cases than he could handle. His practice had been a massive setback for the Mumbai Police, who often tried brushing the errors in their investigation under the carpet, aided by incompetent lawyers representing the accused, especially in terror-related cases.https://mumbaimirror.indiatimes.com/mumbai/crime/shahid-azmis-murder-they-didnt-just-kill-my-son-but-also-humanity/articleshow/62857742.cms