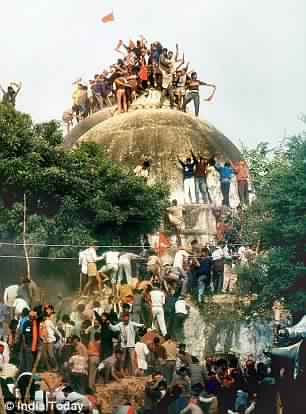 On September 30, a Special Court of CBI acquitted all the accused political leaders saying that the demolition was not preplanned and that the leaders had no control over the mob. RUCHIRA GUPTA, a senior journalist who was at Ayodhya on the day of the demolition, narrates the events and tells us why the demolition was definitely a planned conspiracy with full participation of the leaders.

I was an eyewitness, as a journalist, to the demolition of the 16th-century Babri Masjid in 1992. On the day of the demolition, I was on the terrace with BJP and Rashtriya Swayamsevak Sangh (RSS) leaders like L K Advani, Uma Bharati, Murli Manohar Joshi, among several others.

I had followed L.K. Advani for a week, as he travelled across much of north India holding political rallies, inviting people to Ayodhya on 6 Dec, to build a temple where the mosque stood.

Everything I heard and saw proves that the demolition was deliberate, intentional, and pre-planned by the RSS, BJP, and their affiliate organisations. Here are ten things I witnessed and experienced that prove intentionality and pre-planning.

It was clear that the trench was dug to weaken the foundation, again suggesting a degree of pre-planning.

1. Slogan’s indicated planning to build a temple and not transform the mosque into temple

At every rally that I attended between 3rd and 6th December, L K Advani asked the crowds to pledge with him:

(We pledge in the name of Ram,

We will build a temple on that very spot.)

Advani did not say they would transform the mosque into a temple. He very clearly said that they would build a temple on the spot, where the temple existed.

In addition, he bade the rallyists to perform कर सेवा (work with their hands) in Ayodhya, and not just sing peacefully. “ हम भजन कीर्तन गाने नहीं जा रहे हैं.” (We are not going there to sing devotional songs.) Both slogans prove intentionality beyond a doubt.

2. Incitement for destruction through unambiguous and clear slogans

On December 6, in Ayodhya at the site of the mosque,  Advani along with a cohort of others like Murli Manohar Joshi, Uma Bharti, Pramod Mahajan, Acharya Dharmendra, Sadhvi Rithambara, Vijay Raje Scindia, were deliberately enticing crowds to demolish the mosque. One of the most popular slogans led by Uma Bharti and used by all other leaders, which the crowds chanted was: “एक धक्का और दो, बाबरी मस्जिद तोड़ दो (Give one more push, destroy the Babri Mosque.)  The restless crowd responded by storming the mosque. They set upon the building with axes, hammers, and grappling hooks, and within a few hours, the entire structure, made from mud and chalk, was levelled. There is no ambiguity of intent in this slogan. It very clear incited the crowd to destroy the structure. The fact that the crowds had axes, hammers, and grappling hooks prove a degree of pre-planning.

3. Karsewaks had dug a trench to weaken foundation from before

I went inside the mosque after the second dome came down. I had to cross a trench dug around the mosque. It was clear that the trench was dug to weaken the foundation, again suggesting a degree of pre-planning.

The silencing of journalists proves a level of planning and sophistry that was beyond the capacity of an out of control mob.

4. Karsewaks dragged me away to rape and murder me in order to silence me as a journalist

I was nearly strangled when I went inside the mosque, which was densely crowded by men, most with saffron headbands and badges, some with saffron shirts. While they were trying to strangle me, they were also poking my private parts. They dragged me to the trench with the intention of rape and murder, to silence me from bearing witness. Luckily I escaped. My photographer who was nearby was also attacked and his camera roll taken away. The physical attack on my photographer and me was a deliberate attempt to remove any evidence of proven planning and intentionality. I later learnt that other journalists had been locked up and beaten too. The silencing of journalists proves a level of planning and sophistry that was beyond the capacity of an out of control mob.

5. L K Advani made no attempt to control the mob of karsewaks, and ensure safety of women and journalists

L K Advani ignored my request to announce on the mike that journalists and women should not be attacked though there were some foreign journalists who were bleeding. This again proves pre-meditation and evidence that an order had been given to silence journalists. Clearly, the leader could not countermand his own orders.

Vijay Raje Scindia and Murli Manohar Joshi were hugging each other. She was saying that watching the demolition was like a pilgrimage for her, and now she could die in peace.

6. Leaders celebrated the demolition and watched the destruction around them

I was witness to much jubilation and celebration on the terrace from which the leaders were giving speeches. Vijay Raje Scindia and Murli Manohar Joshi were hugging each other. She was saying that watching the demolition was like a pilgrimage for her, and now she could die in peace. Sadhvi Rithambara and Uma Bharti were posing against the collapsing mosque and burning hutments with two journalists-Chandan Mitra and Swapan Dasgupta.

People were touching the feet of L.K. Advani. He was watching homes of poor Muslims who lived in shanties around the mosque burn through his binoculars. When I complained about the assault on me, he said: “Forget what happened to you, this a big day, celebrate, eat something sweet.” Clearly not the reaction of somebody who was appalled at an out of control mob that was assaulting female journalists.

7. Advani ordered the mob of karsewaks to stop the CRPF from entering the scene

I heard L K Advani repeatedly ask the crowds to stop the Central Reserved Police Force (CRPF) from coming till the very last dome of the mosque came down. This proves collusion with the crowd, not helplessness. It once again established intentionality in letting the mosque fall.

8. Dress Rehearsal of demolition on the previous day

BJP Supremo Atal Behari Vajpayee too tried to stop me from testifying by advising me that “Girls from good families do not speak about what happened to them physically.

9. Right-wing lawyers indulged in character assassination to suppress the truth that I had witnessed

The questions asked of me by the BJP, RSS, Vishwa Hindu Parishad, and Bajrang Dal lawyers during cross-examination in the Liberhans Commission of Inquiry, Bahri Tribunal, and Press Council did not pertain to what I witnessed but to trivialise me as a woman of “bad character.” I was asked if I smoked, worshipped any god, acted in TV serials, how many male friends I had and how could I in my dishevelled state, after the physical assault go to speak to a leader like Advani. The attempt was to shame me. This again proves a plan to discredit those who could establish intentionality.

10. Atal Behari Vajpayee dissuaded me from testifying on account of being a woman

BJP Supremo Atal Behari Vajpayee too tried to stop me from testifying by advising me that “Girls from good families do not speak about what happened to them physically.” He asked me to forget about what happened and move on. I said I would if the party would apologise and say it had happened unintentionally, He said that was not possible. The topmost leader was not able to get a statement from his party to say that the attack on me was unintentional, so how come the court has decided that the demolition of the mosque was unintentional?

The Special Court of the Central Bureau of Investigation (CBI) judgment in Lucknow, 28 years after the crime, has acquitted all 32 people accused of criminal conspiracy and inciting a mob to tear down the Mughal-era mosque, saying that the destruction was not pre-planned or unintentional.

I wonder if they did not hear of the slogans, see the photographs of the trench dug around the foundation of the mosque, hear journalistic accounts of attacks and silencing, not take into account that Kalyan Singh did not allow the CRPF to come till the mosque was completely destroyed or listen to eyewitness accounts of the way the leaders goaded the mob.

I certainly did not hear even one of the accused leaders try to stop the mob, not even when they physically tried to rape and kill me.

I left after Advani left Ayodhya that day.

The acquittal is shameful.

It does not help India.

(Ruchira Gupta is a senior journalist and activist. Views are personal.)

#India - Effective PDS lifted 38 million people out of poverty in 2009-10
And Now the Christians Speak Up…. against Intolerance
SC-   5 judges to hear Aadhaar validity pleas
India orders Twitter and Facebook to take down posts critical of its coronavirus handling