What Judges Said In Verdict On #RightToPrivacy 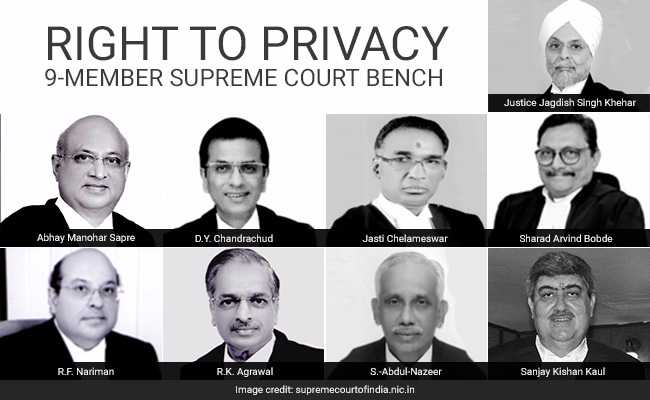 Here are 5 quotes from the verdict:

New Delhi: A nine-judge constitution bench of the Supreme Court on Thursday held that privacy is a fundamental right under the Consitution of India.

“Privacy is intrinsic to the right to life and personal liberty under Article 21 of the Constitution and will be included under part III of the Constitution.”, said chief justice J.S. Khehar while pronouncing the unanimous verdict.

“Right to Privacy” will now find place under Part III of the Constitution of India along with other fundamental rights: right to equality before law, right to various freedoms such as speech and expression/to move freely, right against exploitation, right to freedom of religion, cultural and educational rights and right to constitutional remedies.

Here’s what judges on the nine-member consitution bench said while pronouncing their unanimous verdict on privacy as a fundamental right:

■ Privacy is a constitutionally protected right which emerges primarily from the guarantee of life and personal liberty in Article 21 of the Constitution.

■ Privacy includes at its core the preservation of personal intimacies, the sanctity of family life, marriage, procreation, the home and sexual orientation.

■ Privacy protects heterogeneity and recognises the plurality and diversity of our culture.

■ The submission that the right to privacy is an elitist construct which stands apart from the needs and aspirations of the large majority constituting the rest of society, is unsustainable. It betrays a misunderstanding of the constitutional position.

■ A woman’s freedom of choice whether to bear a child or abort her pregnancy are areas which fall in the realm of privacy.

■ Telephone tappings and internet hacking by State, of personal data is another area which falls within the realm of privacy.

■ The strictest scrutiny is the standard of compelling state interest to be used. As for others, the just, fair and reasonable standard under Article 21 will apply.

■ Any interference with privacy by an entity covered by description of the “state” under law must satisfy the tests applicable to whichever one or more of the Part III freedoms the interference affects.

■ The inalienable fundamental right to privacy resides in Article 21 and other fundamental freedoms contained in Part III of the Constitution of India.

■ Right to privacy has multiple facets, and has to go through a process of case-to-case development as and when any citizen raises his grievance complaining of infringement.

■ It is a right which protects the inner sphere of the individual from interference from both State, and non-State actors and allows the individuals to make autonomous life choices.

■ The privacy of the home must protect the family, marriage, procreation and sexual orientation which are all important aspects of dignity.

Here’s how this ruling can impact you.

Aadhaar and telemarketing
Possible impact: Sharing of biometric data, iris data and mobile numbers may no longer be mandatory
Judge’s view: “As case law, both in the US and India show, this concept (of privacy) has travelled far from the mere right to be let alone to recognition of a large number of privacy interests…(including) rights as to… data protection,” wrote Justice Nariman.

Medical Termination of Pregnancy Act
Possible impact: Pregnant women may have another avenue to seek permission for abortion
Judge’s view: “A woman’s freedom of choice whether to bear a child or abort her pregnancy are areas which fall in the realm of privacy,” said Justice J Chelameswar.

Beef ban
Possible impact: Could impact centre’s decision to ban cow meat
Judge’s view: “I do not think that anybody would like to be told by the State as to what they should eat,” said Justice Chelameswar.

LGBTQ rights
Possible impact: Homosexual acts may no longer be criminalised
Judge’s view: “The privacy of the home must protect the family, marriage, procreation and sexual orientation which are all important aspects of dignity… Ones sexual orientation is undoubtedly an attribute of privacy,” said Justice Sanjay Kishan Kaul.

Euthanasia
Possible impact: The fight for legalising assisted suicide could get a boost
Judge’s view: “An individual’s rights to refuse life prolonging medical treatment or terminate his life is another freedom which falls within the zone of the right of privacy,” said Justice Chelameswar.