Why is the West praising Malala, but ignoring Palestinian Girl Ahed? 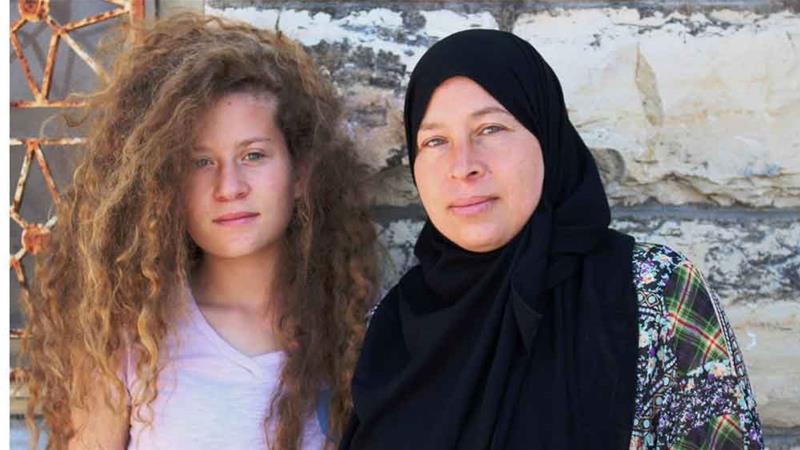 Ahed Tamimi, a 16-year-old Palestinian girl, was recently arrested in a night-time raid on her home. The Israeli authorities accuse her of “assaulting” an Israeli soldier and an officer. A day earlier she had confronted Israeli soldiers who had entered her family’s backyard. The incident happened shortly after a soldier shot her 14-year-old cousin in the head with a rubber bullet, and fired tear-gas canisters directly at their home, breaking windows.

Her mother and cousin were arrested later as well. All three remain in detention.

There has been a curious lack of support for Ahed from Western feminist groups, human rights advocates and state officials who otherwise present themselves as the purveyors of human rights and champions of girls’ empowerment.

Ahed, like Malala, has a substantial history of standing up against injustices.

Their campaigns on empowering girls in the global South are innumerable: Girl Up, Girl Rising, G(irls)20 Summit, Because I am a Girl, Let Girls Learn, Girl Declaration.

When 15-year-old Pakistani activist Malala Yousafzai was shot in the head by a member of Tehrik-e-Taliban, the reaction was starkly different. Gordon Brown, the former Prime Minister of the United Kingdom, issued a petition entitled “I am Malala.” The UNESCO launched “Stand Up For Malala.”

Malala was invited to meet then President Barack Obama, as well as the then UN Secretary-General Ban Ki-moon, and addressed the UN General Assembly. She received numerous accolades from being named one of the 100 Most Influential People by Time magazine and Woman of the Year by Glamour magazine to being nominated for the Nobel Peace Prize in 2013, and again in 2014 when she won.

State representatives such as Hillary Clinton and Julia Gillard as well as prominent journalists such as Nicholas Kristof spoke up in support of her. There is even a Malala Day!

But we see no #IamAhed or #StandUpForAhed campaigns making headlines. None of the usual feminist and rights groups or political figures has issued statements supporting her or reprimanding the Israeli state. No one has declared an Ahed Day. In fact, the US in the past has even denied her a visa for a speaking tour.

Ahed, like Malala, has a substantial history of standing up against injustices. She has been protesting the theft of land and water by Israeli settlers. She has endured personal sacrifice, having lost an uncle and a cousin to the occupation. Her parents and brother have been arrested time and again. Her mother has been shot in the leg. Two years ago, another video featuring her went viral – this time she was trying to protect her little brother from being taken by a soldier.

Why isn’t Ahed a beneficiary of the same international outcry as Malala? Why has the reaction to Ahed been so different?

There are multiple reasons for this deafening silence. First among them is the widespread acceptance of state-sanctioned violence as legitimate. Whereas hostile actions of non-state actors such as the Taliban or Boko Haram fighters are viewed as unlawful, similar aggression by the state is often deemed appropriate.

This not only includes overt forms of violence such as drone attacks, unlawful arrests, and police brutality, but also less obvious assaults such as the allocation of resources, including land and water. The state justifies these actions by presenting the victims of its injustices as a threat to the functioning of the state.

Once declared a threat, the individual is easily reduced to bare life – a life without political value. Italian philosopher Giorgio Agamben has described this as a time/place sanctioned by sovereign power where laws can be suspended; this individual can therefore now be made a target of sovereign violence. Terrorists often fall within this category. Thus, the execution of suspected terrorists through drone attacks without due judicial process ensues without much public uproar.

The Israeli police have deployed a similar strategy here. They have argued for extendingAhed’s detention because she “poses a danger” to soldiers (state representatives) and could obstruct the functioning of the state (the investigation).

Casting unarmed Palestinians like Ahed – who was simply exercising her right to protect her family’s wellbeing with all the might of her 16-year-old hand – in the same light as a terrorist is unfathomable. Such framings open the way for authorising excessive torture – Israel’s education minister Naftali Bennett, for instance, wants Ahed and her family to “finish their lives in prison.”

Anthropologist Miriam Ticktin argues that while the language of morality to alleviate bodily suffering has become dominant in humanitarian agencies today, only particular kinds of suffering bodies are read as worthy of this care.This includes the exceptionally violated female body and the pathologically diseased body.

Ahed’s father Bassem Tamimi stands inside a waiting cell ahead of the verdict in his trial at Israel’s Ofer military court near the West Bank city of Ramallah on May 20, 2012 [AP/Diaa Hadid]
Such a notion of suffering normalises labouring and exploited bodies: “these are not the exception, but the rule, and hence are disqualified.”

Issues of unemployment, hunger, threat of violence, police brutality, and denigration of cultures are thus often not considered deserving of humanitarian intervention. Such forms of suffering are seen as necessary and even inevitable. Ahed, therefore, does not fit the ideal victim-subject for transnational advocacy.

Relatedly, girls like Ahed who critique settler colonialism and articulate visions of communal care are not the empowered femininity that the West wants to valourise. She seeks justice against oppression, rather than empowerment that benefits only herself.

Her feminism is political, rather than one centred on commodities and sex. Her girl power threatens to reveal the ugly face of settler-colonialism, and hence is marked as “dangerous”. Her courage and fearlessness vividly render all that is wrong with this occupation.

Ahed’s plight should prompt us to interrogate our selective humanitarianism. Individuals who are victims of state violence, whose activism unveils the viciousness of power, or whose rights advocacy centres communal care, deserve to be included in our vision of justice.

Even if we don’t launch campaigns for Ahed, it is impossible for us to escape her call to witness the mass debilitation, displacement and dispossession of her people. As Nelson Mandela said, “We know too well that our freedom is incomplete without the freedom of the Palestinians.”