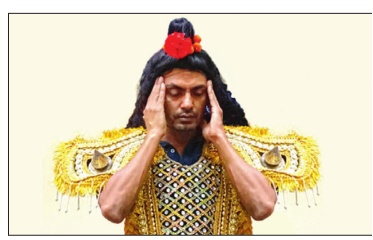 Making Hinduism a monopoly business:
Over the years, frequent reports in local news pages of papers about how people from one faith took part in the festive or religious activities of another bemused me. I wondered why such a big deal is made out of what is perfectly normal behaviour. It was as if an exaggerated virtue was being made out of everyday interaction.This week, however, i was reminded it is not as normal as one would assume. Nawazuddin Siddiqui, childishly thrilled at performing for the first time before his home crowd in Muzaffarnagar‘s Budhana village, rehearsing for a small part in the village Ramlila with the other actors who had invited him to participate, was rudely reminded that it isn’t so normal.

A group of Sainiks, local defenders of good behaviour and religious tradition, voiced vocal opposition. As is usual, when faced with angry , shrill groups espousing nonsense, the organisers and local administration buckled. The day’s Ramlila itself was called off.

The subsidiary reasons: Nawaz is currently a controversial figure since his sisterin-law has filed a case against him, and him taking on the role (of Mareech, the deer) is unfair to the actor who had originally prepared for it. The primary reason: “No Muslim actor has set foot on the stage in the 50-year history of the local Ramlila, we couldn’t allow that now.“

I am not sure whether that 50-year-old fact is something the village should be proudly carrying forward or be embarrassed about. In those 50 years, a lot has happened which seems to have passed Budhana’s aggressive Shiv Sainiks by. At some point in those 50 years Mohd Rafi, Naushad and Shakeel Badayuni came together to give us compositions like Man Tarpat Hari Darshan Ko and Madhuban Mein Radhika. The village has probably played Jai Raghunandan Jai Siya Ram many a time in these years without having an issue with Rafi’s Muslim voice rendering it.

The list of bhajans to which names such as his contributed would take up paragraphs.Many in the village have probably huddled together in front of black and white TV sets to watch Mahabharata, scripted for TV by Rahi Masoom Raza, who responded to a query in 1990 on some groups objecting to his part in the mega series with “I’m hurt and amazed at the furore created about a Muslim writing the script. Am I not an Indian?“ Through the years, towns across UP have taken Muslim participation in Ramlila for granted, including occasionally playing the primary characters.Village Mumtaz Nagar, a few kilometres from Ayodhya, where Muslims playing key roles turned vegetarian for the duration of the Ramlila in the past few years is not a standalone example. As of today , on the popular serial Siya Ke Ram, Danish Akhtar Saifi is able to play the role of Hanuman without anyone finding it out of the ordinary .

Coming back to Nawazuddin.Why would not being able to perform on this very small village stage distress an actor who has been felicitated at global film festivals? He explained that part: “When I was growing up here, there was a boy named Madan who used to play Ram in the local Ramlila. We all used to respect him because of the aura around him, since he was Ram. I used to be fascinated by that. Toh tab se hi khwahish thi ki mujhe bhi Ramlila mein perform karna hai.“

Let us not make the quiet Nawaz in Muzaffarnagar pay for what the belligerent Nawaz in Islamabad is doing or not doing. This is not defending our faith, our nation, our troops, whatever. This is just crassness, masquerading as a mix of some or all of the above. SRK has to travel to the US for the stardom to be knocked out of him at the airports. Nawazuddin shouldn’t be fearing travelling to his own village and having his extremely subdued stardom tossed off the stage.

The topic of Hindu-Muslim equations in UP reminds me of my Hindi NCERT textbooks which introduced me to the poetry of Raskhan ­ the Krishna-worshipping Syyed Ibrahim. He famously wrote: “Reading the Shastras You become a Pandit, Reciting the Quran, a Maulvi, But if you have not known Love in that, What is the use?“

Narendra Modi’s war on the environment
How Amnesty researcher was deported from India for her report on AFSPA
#India - Why the #deathpenalty must end
Former Chairperson of NCW assaulted, Delhi Police ‘too busy’ to help #Vaw