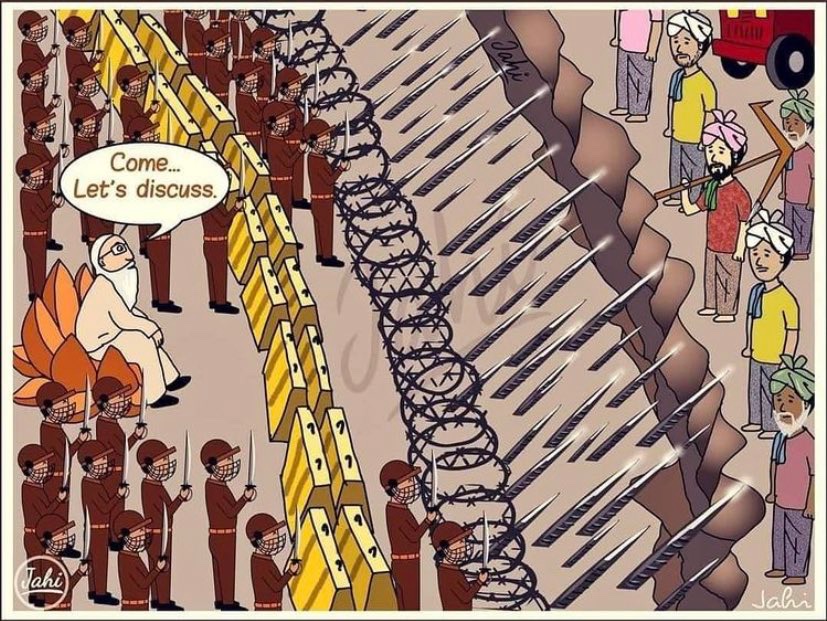 The Farmers’ Movement cannot be quelled by arbitrary administrative orders

8th Feb: The recent order of the Allahabad High Court, passed by the Division Bench of Justices Ramesh Sinha and Rajeev Singh, dated 2nd February, 2021, concluding that the Uttar Pradesh Govt had no legal grounds to issue notices to large numbers of farmers and activists, preventing them from participating in peaceful protests is a significant landmark in upholding people’s constitutional right to protest and redress against whimsical administrative interference in the same. The court order clearly establishes the arbitrariness and violation of principles of natural justice in the process of notices issued by the UP Government on and after 19th January 2021, in the attempt to suppress farmers’ participation in the protests organized on 26th January.

The Order was issued in a PIL filed by social activist and NAPM Convenor Arundhati Dhuru, who approached the Court in the context of many such notices issued to farmers and workers associated with Sangatin Kisan Mazdoor Sangathan, Sitapur, under Sec 111 of the Cr.PC, merely on the basis of police apprehension of violation of ‘law and order’.  The PIL demanded the quashing of notices against 163 farmers, including women, who had been asked to pay bonds between Rs 50,000 to Rs 10,00,000, and to provide two like sureties, to ensure that they would not take part in any kind of agitation or dharna. In addition to being patently arbitrary, these notices were grossly unjust and a mockery of the situation of already impoverished small and marginal farmers and workers, many of whom belong to Dalit and OBC communities.

As is noted in the Order itself, when the Allahabad High Court asked the learned Addl Adv General on 2nd Feb to provide reasons as to why such prohibitive bonds were demanded by various Sub-Divisional Magistrates (SDMs) under the District Magistrate (DM), Sitapur, the AAG was unable to justify the action of the State. He, however, indicated that the proceedings in the said matter were ‘dropped’, since there was no longer a law and order risk. The AAG also undertook to instruct the Sitapur administration ‘to be careful in the future, to avoid unnecessary harassment to any person’.

Taking cognizance of the aforesaid, the Hon’ble Court disposed off the matter concluding that the administration’s ‘conduct should not be such which reflects arbitrariness and against the principles of natural justice’. NAPM welcomes the Order and hopes that the same would be considered in full letter and spirit across the state and the Govt would refrain from resorting to similar high-handed measures in the future, asking for bonds and sureties on flimsy, unjustified grounds.

As is known, this is just one of the many recent attempts to prevent farmers, activists and concerned citizens from participating in solidarity action with the historic farmers’ protests. The Central Government, in particular, has been striving to prevent and then stop (albeit unsuccessfully) the Farmers’ Protests, ranging from attempts at defamation, to control of media reporting, detentions and arrests. The UP state government has also had a significant role to play in denying citizens their constitutional right to protest.  A few weeks back activist and NAPM Convenor Richa Singh was unlawfully detained at her home for a couple of days. The Varanasi administration also filed a case under ‘Goondas Act’ against senior activist Ramjanam.

Very recently, on 6th February, the day when the national call for peaceful chakka-jam was given by the farmers’ movement, Suresh Rathod, of MNREGA Mazdoor Union, Varanasi, was detained at his home on the arbitrary grounds of potentially creating a breach of peace. His participation in the protests was prevented, as in multiple instances in the past.

A few days prior to this, an FIR was registered against social activist Nandalal Master, along with Shyam Sundar, Amit, Panchmukhi Singh and Sunil Kumar and 25 other ‘unknown persons, for a peaceful village protest on 29th January, during which the effigy of the three anti-farmer acts was burnt. The archaic United Province Special Powers Act (1932) which was invoked in their case, has a history of being used in the state to quell protests, in particular protests against the BJP.

The circumstances of the pandemic also make it possible to invoke the Disaster Management Act in a targeted way against anyone trying to organize, even when adequate precautions against Covid are taken. The convenient interpretation and use of legislation to suppress in particular protests against the centre are stark. We wish to re-assert here that legislation meant to enable addressing the pandemic situation should not interfere with people’s constitutional right to organize.

In yet another poignant incident, an FIR was filed by the UP police against the grief-stricken family members of Baljindra Singh, a farmer who died at the protest site in Ghazipur, for draping his body in the tricolour. It must be recalled that a few years back, the body of one of the accused in the ‘Dadri lynching case’ was also draped in the tricolour, but that did not attract any legal action.

Read in the broader context of the State clampdown, the order of the Allahabad High Court comes as a reminder of the duty of the administration and the police to uphold the constitutional rights of citizens to organize and participate in peaceful democratic protests. State apparatuses cannot function as arbitrary, callous and biased forces suppressing voices of dissent.

The order, in that sense, is a vindication of those who believe in democratic values. It is in line with the call issued by UNHRC on 5th February, emphasizing the need to protect the protestors’ right to peaceful assembly and expression. The State cannot use law as a tool of oppression to stifle mass outrage such as the recent farmers’ movement which is only growing stronger within UP and across the country.

We call upon the UP Govt. to reflect on the implications of the Hon’ble High Court’s order, in letter and spirit, and cease its attempts to muzzle democratic protests, end arbitrary detentions and arrests and withdraw all malafide FIRs.

We also urge the government to stop what has become an all-pervasive practice of repression of all dissenting voices. Democratic protests against undemocratic laws and practices will not stop.

We call upon all sections of citizens and democratic groups to remain ever vigilant and raise their voices in safeguarding our fundamental rights to organize and dissent, peacefully.

We continue to stand in solidarity with the farmers’ protests across the country including lakhs of farmers from various parts of UP and remain steadfast in the demand for complete repeal of the three farm laws.