From Allahabad to Prayagraj: What’s in the name? 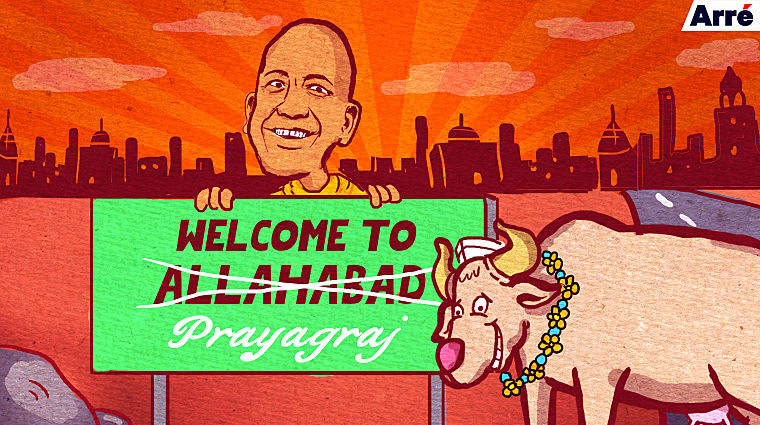 Adityanath Yogi, Chief Minister of UP seems to be on the name changing spree. In his latest move he has changed the name of famous city of UP, Allahabad to Prayagraj. Prayag is the meeting point of rivers and since this city is the meeting point of Ganga, Yamuna and probably of invisible Sarswati, this name might have been chosen by him in his attempts to remove the Islamic touch to the names of our cities. As such many a versions of the origin of the name of this city are circulating. One such says that it was Ila-vas. Ila being the mother of mythological Pururva. Another such says it was in the name of Alha of Alha-Udal (part of popular folk lore) fame. More concrete records tell us that Akbar had named it Illaha-bad or Illahi-bas. Illaha is a generic term of Gods. He regarded this city as holy city of Hindus and Illah-bas in Persian means ‘abode of Gods’. This is clear from the records and from the coins of that time and reflects the inclusive spirit of Akbar. Earlier Yogi had made many changes in the names like that of Mughal sarai to Pundit Deendayal Upadhayay Junction, Agra airport in the same leader, Urdu Bazar to Hindi Bazar, Ali Nagar to Arya nagar etc. He regards all Muslim sounding names as being alien.

In an interview Yogi said he has to change many more names. On his agenda is to change the name Taj Mahal to Ram Mahal, Azamgarhg to Aryamgarh and to cap it all as per him the name India in our constitution should be changed to Hindustan. As per him these places were renamed after invasion of Muslim kings, so there is a need to re-change them. In UP Mayawati had already begun this name changing game which was to some extent reversed by his successor Akhilesh Yadav. Now in a more persistent way Yogi is identifying the Muslim sounding names and changing them one by one.

Adityanath Yogi is the Mahant of famous Gorakhnath Math. His predecessor of Math was in also politics, and Yogi has been a major player on the political chess board in UP. He comes from the Hindu Mahasabha stream of politics. His dominance has been very visible as his slogan, UP mein rahna hay to Yogi Yogi Kahna hoga (If you want to stay in UP, you have to Chant Yogi-Yogi) had been prevalent in parts of UP. His Hindu Yuva Vahaini has been in the news off and on; not for right reasons. He belongs to the group of large number of Holy men, Sakski Maharaj, Sadhvi Uma Bharati, Sadhvi Nirnajan Jyoti etc. who have been part of Hindu nationalist agenda. As such Holy men are supposed to have renounced the World to focus on spiritual pursuits, but this lot seems to be more active in Worldly pursuits.

The phenomenon of these holy men-women being in politics seems to be there in many post-colonial states. In these countries there has been absence of radical land reforms and there is persistence of hold of landlord-clergy which seems to be the reason for the God people to be in political arena. In these places God men and women has been part of the politics, which opposes the democratic values as being Western or alien, being against the spirit of ‘our’ land. They in a way harp on the pre Industrial values of birth based hierarchies. Surveying these countries one can see the rise of Ayatollah Khomeini in Iran, succeeded by many Ayatollahs. In Pakistan the Mullahs have been working closely with the military and landlord elements to undermine the democratic possibilities in society. In Pakistan the most prominent name which emerged was that of Maulana Maududi, who worked closely with Zia Ul Haq in Islamization of Pakistan. In neighboring Mynamar, the monks like Ashin Wirathu, also called ‘Burma’s bin laden’, are part of the politics to oppose the democratic society, to target the religious minorities there.

Back to India we have seen the crop of these Holy men, dominating the political scene in various ways. Most of these Godmen-women have been part of Hindu nationalist movement and are very vicious as far as hate speech is concerned. One recalls that Sadhvi Niranjan Jyoti had used the word haram Jade, Sakshi Maharaj was booked for blaming Muslims for population growth. Yogi himself has many cases pending against as far as hate speech is concerned. The worst of these was when he advised the rape of dead Muslim women.

Yogi has intensified the communal agenda to no end. UP state is organizing Hindu religious festivals. One recalls that the on occasion of Divali, the Helicopter carrying Lord Ram and Sita landed and the Gods were received by Yogi. UP State also organized the lighting of lamps in big numbers. Recently he had again been in news for the declaration that state Government will spend 5000 crores for the Kumbh mela. All this is taking place at a time when the state is suffering sever crunch in regards to health care and other infrastructure related issues. Young children, infants have died in hospital for lack of facilities; times and over again. The cities where name change has been brought about languishes with bad infrastrures and state constantly lags behind in Human growth indices, what to talk of the abysmal condition of human rights in the state. The condition of minorities is worsening as state sponsored moves to trample on their livelihood in the form of closing many the meat shops, which was done right at the beginning of his rule in UP, among other steps which is order of the day.

Yogi also bluntly stated that secularism is a big lie. His actions are showing as to how he is forcing the march of the state in the direction of Hindu nation, without any qualms for secular values as enshrined in our Constitution!