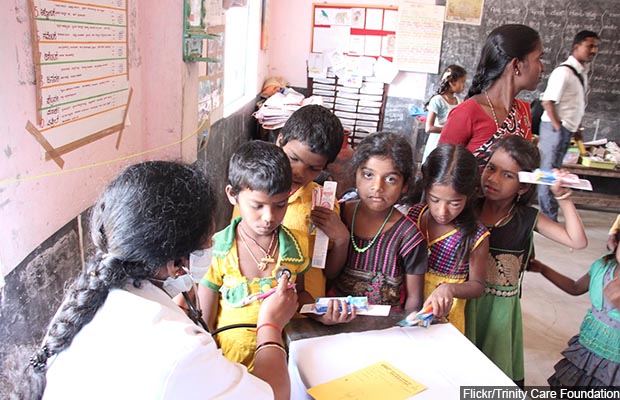 Budget speeches are all about messaging. While we all speculated on what the budget will hold for the social sector, many of us, got it wrong.

This year’s budget speech did not focus on investments in the government’s flagship schemes of sanitation or housing. Gone too was the focus on skills and employment generation.

The budget, finance minister Arun Jaitley noted, would focus on “strengthening agriculture and rural economy, provision of good health care to economically less privileged, taking care of senior citizens, infrastructure creation and… improving the quality of education in the country”.

A look at the numbers for social sector programmes, however, suggests that the messaging and numbers don’t add up.

The budget speech found no mention of allocations for flagship schemes like the Pradhan Mantri Awas Yojana (Prime Minister’s Housing Programme, PMAY) and the Swachh Bharat Mission (Clean India Programme) except to reiterate the targets that had been set or achieved.

In fact, allocations for the rural arms of both schemes have declined  9% compared to the previous year’s revised estimates .

The government’s strategy on rural employment generation is also unclear. The Mahatma Gandhi National Rural Employment Guarantee Scheme (MGNREGS), the largest scheme of the ministry of rural development, had the highest-ever allocation but found no mention in the budget speech.

Given backlogs in pending payments and increasing compensation due, this increase may still not be enough and the government’s stand on MGNREGS remains unclear.

The big bang push on improving quality education would be through digital technology and infrastructure, Jaitley said in his speech.  “Technology will be the biggest driver in improving the quality of education,” the finance minister said.

“We propose to increase the digital intensity in education and move gradually from ‘‘blackboard’’ to ‘‘digital board’.,

Now, here are the facts: only 57% of all elementary schools had access to electricity and only 26% had computers, according to 2015 data from District Information System for Education (DISE). This is despite the fact that Rs 50 lakh per district has been allocated under the Sarva Shiksha Abhiyan (SSA), for computer aided learning.

Anyone who has visited a remote school would know  – when schools don’t even have buildings, digital blackboards are of least concern.

While school infrastructure continues to be weak, here’s a positive: with 248,209 teachers yet to enrol in teacher training, as per official data up to July 2017, the government’s announcement of initiating integrated B.Ed programme for teachers and focusing on teacher training are welcome steps.

Limited provision for maternal and child health and nutrition

The allocation for reproductive and child health within the National Health Mission (NHM) has been reduced 30%, according to budget  data.

In 2017, the government had announced a number of policies and strategies for improving India’s performance on maternal and child health.

In May 2017, the maternity benefit programme, now renamed Pradhan Mantri Matru Vandana Yojana was extended across the country. The scheme provides compensation for wage loss through cash incentives of Rs 5,000 to mothers for delivery of the first child.

About 60 economists had written to the finance minister in December 2017, pointing out that Rs  2,700 crore allocated to the scheme was a third of the requirement under the National Food Security Act (NFSA), 2013, which entitles all pregnant women and lactating mothers, and not just mothers of first-borns,  to at least Rs 6,000..

This year’s allocation, in fact, has declined by 7%.

The neglect of the Integrated Child Development Services (ICDS) is also surprising. Especially, given that in September 2017, the government announced an increase in unit costs for the Supplementary Nutrition Programme (SNP) under ICDS that will require higher resources.  The allocation for ICDS, however, show only a nominal 7% increase from Rs  15,245 crore to Rs  16,335 crore.

With the expenditure on SNP already high in many states compared to the approved budgets, it is unclear how these additional unit costs will be financed.

The National Health Protection Scheme (NHPS), cited as the world’s largest government-funded healthcare programme, got a boost. From an annual coverage of Rs  30,000 per family coverage under the Rashtriya Swasthya Bima Yojana (National Health Insurance Programme, RSBY), launched by the government in 2008, the scheme will now cover 100 million poor and vulnerable families with a coverage of up to Rs 500,000 per family.

With more and more patients, even in poorer states, opting for private facilities, a strong health insurance policy may be the only mechanism to ensure universal health coverage.

Past experience on the performance of RSBY suggest that increasing allocations will not suffice.

The RSBY has not been able to reduce out of pocket expenditure (OOPE), IndiaSpend reported on October 17, 2017.

Only 11% households were enrolled under RSBY, and almost half of these belonged to non-poor, according to a recent study by Soumitra Ghosh and Nabanita Datta Gupta covering 37,343 households in 18 states.

Attention will thus need to be paid on ensuring effective targeting, increasing awareness and regulation, if the scheme is to have an impact on improving health coverage.

These increases also seem to have come at the cost of basic primary health care.

The National Health Policy (NHP) 2017 vision of bringing healthcare closer to people by providing comprehensive care – including maternal and child health – while getting a mention in the speech did not see corresponding allocations.

If the aim of India’s health policy is to reduce out of pocket expenditure, focus on preventive healthcare, strengthening referrals and a strong primary healthcare system are essential.

Violence in Assam has subsided, but anxieties of land and identity are still haunting the people
#India-Bhopal gas tragedy: #DowChemical may finally be held accountable #justice #goodnews
5 most corrupt countries in Asia
Punjab & Haryana High Court- Don’t stress on age to define juveniles