Mainstream economics is in denial: the world has changed

Despite the crash, the high priests of economics refuse to look at the big picture – and continue to prop up world elites 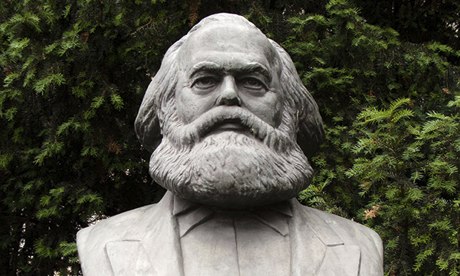 Karl Marx: time he went back on the syllabus? Photograph: Alamy

Rebellions aren’t meant to kick off in lecture theatres – but I saw one last Thursday night. It was small and well-read and it minded its Ps & Qs, and I think I shall remember it for some time.

We’d gathered at Downing College, Cambridge, to discuss the economic crisis, although the quotidian misery of that topic seemed a world away from the honeyed quads and endowment plush of this place.

Equally incongruous were the speakers. The Cambridge economistVictoria Bateman looked as if saturated fat wouldn’t melt in her mouth, yet demolished her colleagues. They’d been stupidly cocky before the crash – remember the 2003 boast from Nobel prizewinner Robert Lucas that the “central problem of depression-prevention has been solved”? – and had learned no lessons since. Yet they remained the seers of choice for prime ministers and presidents. She ended: “If you want to hang anyone for the crisis, hang me – and my fellow economists.”

What followed was angry agreement. On the night before the latest growth figures, no one in this 100-strong hall used the word “recovery” unless it was to be sarcastic. Instead, audience members – middle-aged, smartly dressed and doubtless sizably mortgaged – took it in turn to attack bankers, politicians and, yes, economists. They’d created the mess everyone else was paying for, yet they’d suffered no retribution.

In one of the world’s elite institutions, the elites were taking a pasting – from accountants, entrepreneurs and academics. They knew what they were on about, too. Given his turn on the mic, one biologist said: “I’ll believe economists have reformed when the men behind Black and Scholes [the theory that helps traders value financial derivatives] have been stripped of their Nobel prizes.”

One of the central facts of post-crash Britain is that the elites still hold power, but no longer command the credibility to wield it. You see that when Russell Brand talks on Newsnight about the corrupt lilliputian world of Westminster, and the various YouTube clips total more than 3m views. And I certainly saw it in Cambridge.

Like all the other plebs in Britain – whether on minimum wage, or a five-figure salary – the people in that lecture theatre had been told for decades to trust the politicians, policymakers and employers to provide the jobs, the houses and pensions, and the prospects for their kids. In the wake of the biggest economic rupture since the 1930s, they’re evidently no longer so willing to extend that trust.

But at the same time, the elites – whether in Whitehall or the City – remain in charge. Looking at mainstream economists gives us as good an idea as any as to how reform has been warded off.

As Bateman points out, by rights these PhD-armed boosters of The Great Moderation should have been widely discredited after the crash. After all, the most significant thing to emerge from academic economicsin the past five years has not been any piece of research, but the superb documentary Inside Job, in which film-maker Charles Ferguson showed how some of the best minds at American universities had been paid by Big Finance to produce research helping Big Finance.