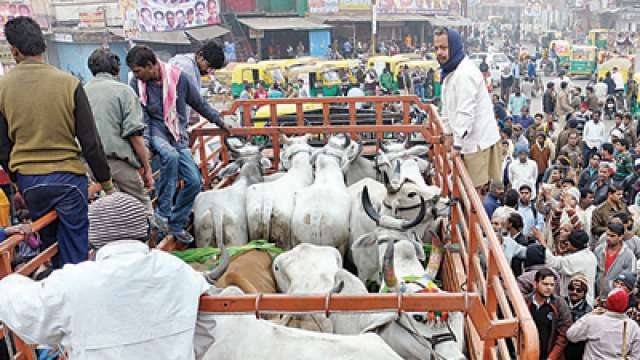 We are seized of the matter and considering various suggestions in the notification, says Centre.

In a setback to Centre, the Supreme court on Tuesday said that the Madras High Court‘s stay on Centre’s notification on sale of cattle including cows for slaughter will continue and would cover entire country.

Cattle slaughter ban: In a big development, the Supreme Court on Tuesday suspended the Narendra Modi government order that had banned the trade of cattle for slaughter, news agency Reuters reported. The apex court on Tuesday said the interim direction of the Madras High Court staying the Centre’s notification banning sale and purchase of cattle from animal markets for slaughter will remain in force and would cover the entire country, news agency PTI confirmed. A bench comprising Chief Justice J S Khehar and Justice D Y Chandrachud took note of the statement of the Central government that it was reconsidering the notification by taking into account various objections and suggestions of stakeholders and would come up with an amended notification.

“Needless to say that the interim direction issued by the Madurai Bench of the Madras High Court shall continue and extend to the entire country,” the bench said. The bench then disposed of the plea filed by the All India Jamiatul Quresh Action Committee challenging the
constitutional validity of the May 23 notification.

Additional Solicitor General P S Narasimha, appearing for the Centre said, the recent notification, in any case, will not be effective unless the state governments earmark local markets as stipulated under it where cattle sale takes place. “Moreover, the Ministry of Environment and Forests and others authorities concerned are looking into various suggestions and objections to the notification and a fresh amended one will be re-notified,” the ASG said, adding the Central government as of now is not seeking a stay on the Madras HC order and apprising the court about the present status.

The apex court considered the submissions of the Centre and asked it to give “sufficient time” so as to enable aggrieved persons to approach the court again with their grievance if any, news agency PTI reported.

What’s this ban all about?

The Centre had on May 23 issued the notification banning sale and purchase of cattle from animal markets for slaughter, a move that is expected to hit export and trade of meat and leather.

The NGO had moved the Supreme Court, challenging the Centre’s notification that bans sale and purchase of cattle from animal markets for slaughter, a move that received flak since its announcement.

The petition was filed by a Hyderabad-based lawyer Fahim Qureshi, stating that the order was discriminatory and unconstitutional, as it prevented cattle traders from earning their livelihood.

On May 25, the Centre through an order imposed a ban on the sale of cattle, including cows, for slaughter and restricted cattle trade solely to farm owners.

Minister for Environment, Forest and Climate Change Harsh Vardhan had ordered that the ministry has notified the Prevention of Cruelty to Animals (Regulation of Livestock Markets) Rules, 2017 to ensure that the sale of cattle is not meant for slaughter purposes.

Regulating animal trade is a state business, but animal welfare is a central subject, thereby providing the window for the ministry to notify the rule.